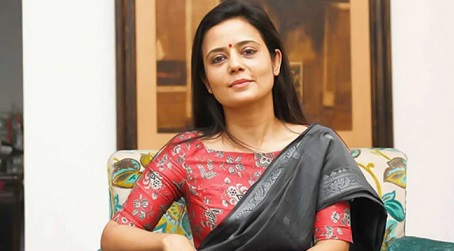 Trinamool Congress MP Mahua Moitra has baited the media with an uncommon insult and when asked to reconsider her comments, has only doubled down in her contempt against the press. So far Mamata Banerjee, the party supremo, hasn’t come out in defence nor issued a reprimand against her party’s star face at the time this is being written (12.30 pm IST).

Mahua termed the press as “two-paisa worth” and after the Press Club Kolkata took up the matter, demanding an apology, the Krishnanagar MP only rubbed salt in the wounds of the press.

This is how it all began. A video surfaced which quickly took the social media by storm. It showed that Mahua is gesticulating a person to leave the venue of the meeting in Nadia district on Sunday.

After he introduced himself as a reporter, Mahua termed him “Who has called do-poisar press (two-paisa worth) here?”

The Press Club Kolkata promptly issued a statement: “Her (Mahua) statement is undoubtedly unwarranted and humiliating…none has the right to insult a media person, we condemn the MP’s comment and express the hope that she will withdraw it immediately and tender her apology.”

Mahua preferred to respond on twitter and if anything her remarks were more brutal: “I apologise for the mean, hurtful, accurate things I said…My meme editing skills are improving,” she said.

Snehasis Sur, president of the Press Cub Kolkata was naturally dismayed. “She made light of her initial comments. Everyone can comprehend what she wanted to convey in the Twitter post.”

TMC, which is fighting to retain her turn in the forthcoming assembly elections, against a resurgent Bharatiya Janata Party (BJP), seems to be riven with infighting and desertions. Media, which naturally reports it, seems to have fallen out of favour.

At least that’s the conclusion one could draw with the comments TMC leaders have made on this present Mahua issue.

Trinamool secretary general Partha Chatterjee said he doesn’t agree with the media but he still has faith in them. Senior Bengal minister Subrata Mukherjee said “…we believe in keeping cordial relations with the media, irrespective of what it reports about us.”

Another TMC MP, Nusrat Jahan, though has said, “we cannot run media down.”

Amidst this verbal joust by her party’s stalwarts, chief minister Mamata Banerjee has chosen to remain silent. But given Mahua has only doubled down on her attack against the media, Mamata’s public silence could amount to acquiescence to Mahua’s conduct.

It would be interesting too how the national media and the press bodies, such as Editors’ Guild of india and Press Council of India react to Mahua’s conduct.

Mahua has studied in the United States and she was an investment banker for JP Morgan Chase in New York City and London. She entered Indian politics in 2009, first in the youth wing of Indian Youth Congress and quickly gained the trust of Rahul Gandhi. In 2010, she moved to TMC and was elected into the assembly from the Karimpur constituency. She became a member of parliament in 2019.

In her short political career, Mahua has courted many controversies. In 2017, she had filed a police complaint against the then BJP union minister Babu Supriyo for “insulting her modesty.” Supriyo had then sent her legal notice. Zee Media then filed a defamatory lawsuit against Mahua for making derogatory remarks while addressing reporters. She was granted bail and put on trial by a Delhi court. Then there were allegations of Mahua assaulting a female constable of Assam Police at Silchar airport.