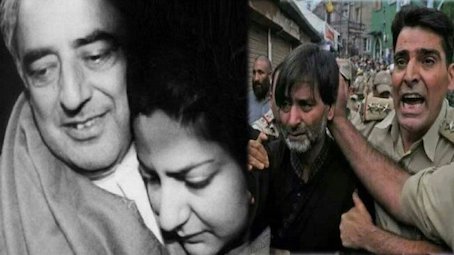 Yasin Malik will now have to face charges for the 1989 abduction of Dr Rubaiya Sayeed, daughter of late Mufti Mohammad Sayeed, who was Union Home Minister at that time. The charges against the Jammu Kashmir Liberation Front (JKLF) chairman have been framed in a Jammu court under 364, 368, 120-B, 3/4 of TADA Act and under Indian Arms Act.

The next hearing of the case was scheduled for March 3 by the TADA special court Sunil Gupta on Friday. The charges were framed after he heard CBI prosecutor Monika Kohli’s arguments in the case. A fortnight earlier also, there was a hearing in this case which has remained pending for the last over 31 years.

Incidentally, Malik is presently in Tihar jail in Delhi facing multiple charges in some other cases also. He is also an accused in a case pertaining to killing of several Indian Air Force (IAF) personnel.

The kidnappers of Rubaiya had bargained with the government of the day for the release of five terrorists then lodged in different jails. These five terrorists, namely Hamid Sheikh, Altaf Ahmed, Noor Mohammad, Javed Ahmed and Sher Khan, were later freed from jails in lieu of Rubaiya’s safe passage.

According to the chargesheet filed in the court, the conspiracy to kidnap Rubaiya was hatched on November 8, 1989. This was done at the house of Mushtaq Lone by Mohammad Rafiq Dar, Ali Mohammad Mir, Iqbal Ahmed, Manzoor Ahmed Sofi, Wazahat Bashir, Shaukat Ahmed, Riaz Ahmed, Manzoor Ahmed and some others.

Rubaiya was abducted when she was returning home from Lal Ded Hospital where she was doing her internship. She was accompanied by her friend Nargis Andrabi when she was abducted on gunpoint. The driver of the minibus in which she was travelling was also overpowered by her kidnappers.

The case has seen many twists and turns over the past three decades, with Malik roaming freely and meeting powerful dignitaries. Across India and sometimes abroad also, and he acquired a larger than life persona due to all this. For over a decade, there was a stay on his prosecution which was granted by the Jammu and Kashmir High Court on some technical point/s.

Almost a year ago, the stay got vacated thus paving the way eventually for Malik’s prosecution. It is likely that trial will gain momentum now and some other accused persons will also face the music for their doings.

There was a huge sense of deja vu in the separatists, secessionists at the time of Rubaiya’s kidnapping and release of terrorists in lieu. It had also spawned a sense of fear among the people as a narrative was built that if the daughter of the Indian Home Minister could be kidnapped in the heart of Srinagar, virtually nobody could consider himself/herself safe.

Incidentally, Rubaiya’s father, late Mufti Mohammad Sayeed, remained Chief Minister of Jammu and Kashmir twice and her sister Mehbooba Mufti once in the intervening years. They also held the post of the Home Minister of J&K but the case against Malik had made no headway during their tenures.