Mamata allegedly hides cases against her in affidavit: Nomination in Nandigram under a cloud 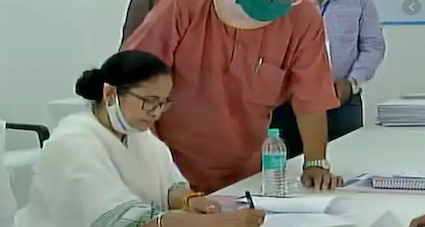 The slips by West Bengal chief minister Mamata Banerjee are acquiring impossible dimensions and the latest one could cost her nomination in the Nandigram constituency.

Mamata’s once fellow founder of Trinamool Congress and now her bete noire, Suvendu Adhikari has filed a complaint with the Returning Officer of the 210 Nandigram assembly constituency, pointing out the candidate, that is Mamata, had failed to disclose in paragraph 5 (ii) particulars in her affidavit the following pending criminal proceedings against her, viz:

The letter also has offered links to the news reports, substantiating its claim, which are available in public domain on a few cases mentioned above.

For instance there is this India Today report (“Five cases registered against Mamata Banerjee in Assam”); then there is one in Indiablooms and still another in Newsheads.

This complaint mentions a Supreme Court judgments in a couple of cases (Public Interest Foundation vs Union of India 2019 SCC Online SC 1617; and Resurgence India vs Election Commission of India and anr. (2014) 14 SCC 189) claiming that the purpose of filing declaration affidavit is to ensure that the fundamental right of the citizens to information is assured.

Further, the Supreme Court, in Public Interest Foundation, held that it is essential that a candidate discloses all pending cases against him/her. “The candidate has failed to disclose these particulars,” asserts the letter.

“Further, the honourable Supreme Court has in “Resurgence India case held that the nomination of a candidate can be cancelled if they fail to fill in all particulars as set out in the form, which the candidate has failed to do so.

“Under the circumstances, we humbly pray that the nomination of the candidate Smt Mamata Banerjee be forthwith rejected,” the letter concludes.

First there was this riffraff on Mamata’s injury, insisted upon as “attack” even now when Election Commission, no less, has declared it to be an “accident.” This of course is with reference to her “injury” in Nandigram where she had gone to file her nomination papers on March 10.