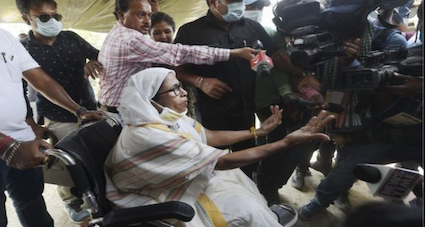 Heavens could fall on West Bengal chief minister Mamata Banerjee if the Election Commission indeed finds her to have violated a section of the Model Code of Conduct which could induce a fine—or a three-month jail term.

The Election Commission today said that Mamata Banerjee’s conduct in a polling booth in Nandigram on April 1 is being separately examined whether it merits “any action under Section 131 and 123 (2) of RP Act and/or under Model Code of Conduct.”

Section 131 in the Representation of People Act involves a punishment of a fine or a three-month jail for disorderly conduct in or near polling stations, as per NDTV.

The Election Commission was responding to Mamata Banerjee’s allegation of disruption of polling at a booth in Boyal, Nandigram where she had to stay put, she claimed, due to a standoff between BJP and her Trinamool party workers.

Mamata had complained on the entry of outsiders and booth capturing at a polling station at Royal in Nandigram on April 1.

The Election Commission pointed out that the media “showed dozens of audio-visual shots of your being in this polling station and literally hurling avalanche of allegations on some officials working in government of West Bengal itself, paramilitary forces and eventually at the Election Commission.”

With “deep regret”, the Election Commission noted that a “media narrative was sought to be weaved hour after hour to misguide the biggest stakeholders which is the voters by a candidate who also happen to be hon’ble CM of the state.”

“At least this should have been appreciated that the sideshow was fraught with immense potential to have an adverse impact on law and order across West Bengal and maybe some other states. And all this was being done when the election process was/is on. There could not have been a greater misdemeanour.”

The EC gave a complete timeline of the smooth progress of polling at Royal despite complaints received from the Trinamool Congress, polling agent and later the CM, as well as steps taken on the spot by the poll authorities to verify and address this. It said there is no mention in reports of officials at various levels “of either outsiders or guns and goons capturing the said booth.”

Trinamool had complained that her election agent was denied entry to the polling booth. EC said the report of the district officers mentioned the great length to which the district administration went to ensure the presence of the polling agent but that he refused to come despite being assured that he would be escorted by the police and the section officer of the booth. “The ECI cannot force anyone unwilling to work as a polling agent,” said the Commission.

The Election Commission further noted that in spite of the presence of the candidate at the polling station for a considerable length of time, the polling process was not disrupted. “Barring a few people shouting slogans for and against Ms Mamata Banerjee, there was no report of any violence, nor was there any intimidation of voters.”

Mamata Banerjee, that day, had told the reporters, that she had filed 63 complaints with the EC since morning, and that the EC was taking orders from the Union home minister Amit Shah and that “we will move the court over it, this is unacceptable.”

Banerjee had also dialled the Bengal Governor, Jagdeep Dhankhar, from the polling booth.

Banerjee is pitted against her former aide Suvendu Adhikari in Nandigram seat.