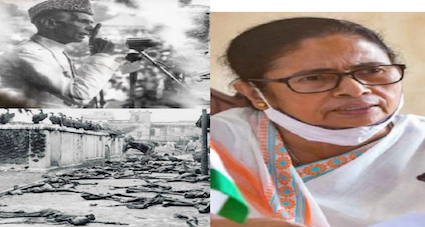 Hours after West Bengal Chief Minister Mamata Banerjee announced that “Khela Diwas” will be celebrated on August 16, the uncanny evocation of Muslim League’s Direct Action Day, which also began on August 16 (1946), is too difficult to overlook.

The Direct Action Day was launched on August 16, 1946, by the Muslim League to call for the partition of India and the creation of the independent Muslim state of Pakistan.

Calling for Direct Action Day, All India Muslim League leader Muhammad Ali Jinnah had said that he wanted “either a divided India or a destroyed India”.

After the general strike was announced, Hindus were massacred in thousands in Bengal. It was described by the Time magazine as the worst communal riots of the century. It later came to be known as a Week of Long Knives. The subsequent spill-over of the Partition are too horrendous to recount.

Taking her “Khela Hobe” slogan to the national stage, Mamata declared that “Khela” will now happen in all states until the BJP is removed from the country.

Reacting to this, BJP leader Swapan Dasgupta said that Muslim League launched its Direct Action Day and began the Great Calcutta Killings in 1946.

“In today’s West Bengal, Khela Hobe has come to symbolise a wave of terror attacks on opponents,” he added.

“Mamata Banerjee wants to hold a rally of opposition leaders in Kolkata in order to cobble up a front. She is free to do so, except that the unelected CM should realise that all non-TMC leaders, invited in Delhi, left the venue, even before she started speaking,” he said in a tweet.