Mamta openly asks for Muslim vote, if we had done same for Hindu votes, imagine: Modi 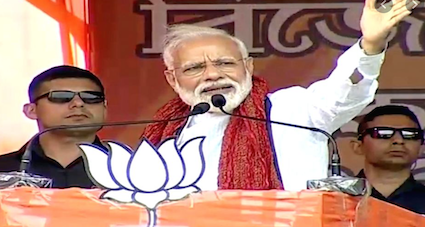 Prime Minister Narendra Modi, while addressing a rally in North Bengal’s Cooch Behar district on Tuesday, took a swipe at Chief Minister Mamata Banerjee for seeking en bloc voting by Muslims for the TMC and said had his party made a similar appeal to Hindus, it would have been criticised and censured.

“Didi recently asked all Muslims to vote en masse for her. It shows that the Muslim vote-bank is slipping out of her hands. Had we said the same thing – that all Hindus should unite – everybody would have criticized us. The EC would have sent us notices. We would have been censored. The fact that you had to say this publicly shows that you have lost the elections,” said Modi.

During the rally, he also replied to Banerjee’s question that whether the Bharatiya Janata Party (BJP) is god or superman as they are predicting the outcome of the election even when elections are still going on. PM Modi said no one needs to be superhuman to predict BJP’s victory as the wave in favour of the saffron camp speaks for itself.

“We are ordinary people, and with the blessings of God, we are committed to the service of the nation”

Taking a dig at her, he further said that Banerjee’s exit is imminent and it is clear after the first two phases of polling. “The wave of BJP in Bengal has cornered Didi’s goons and her nephew,” PM said.

“Tape revealing Trinamool’s syndicate is discussed in the country. How a construction syndicate developed from New Town. The whole country listened to how ‘Bhaipo service tax’ made things miserable in many cities of West Bengal including Howrah.”

“Didi has accused you of taking money and selling your votes. Do you do this? Isn’t this your insult? You must respond to this in the elections,” said Modi.

While the West Bengal is undergoing the third phase of election today, the other phases of elections are scheduled on April 10, April 17, April 22, April 26, and April 29 with results to be announced on May 2.