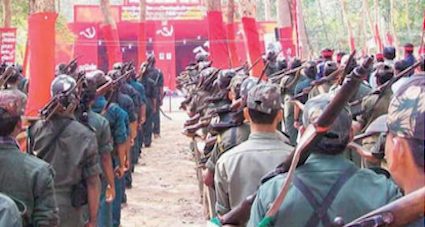 A letter by the Communist Party of India’s (Maoist) Maharashtra state committee on Sunday created a huge sensation after they took to WhatsApp in a bid to communicate with Maratha youths and recruit them to the Naxalite movement, says a report.

The party secretary, Milind Telumbde, has reportedly appealed to Maratha youths to join the Naxalite movement in order to resolve long pending issues of reservations. The letter also charged that the government only works for the Ambanis and Adanis, therefore getting the Maratha reservation is not possible.

It further urged the Maratha youth to pick up weapons and adopt guerrilla warfare techniques to get their demands fulfilled.

The letter has sparked worry in the Maharashtra government and Home minister Dilip Walse Patil has now ordered a probe to find the root of the digital communique that could potentially cause unrest in society.

According to Sandip Patil, Deputy Inspector General (DIG) of police, Nagpur Range,  the letter has been doing rounds on Whatsapp and was received by a local journalist. DIG said Maoists are known to promote the urban Naxal movement and the letter is misleading. It also appears to be written by a person who is well-read and eloquent in Marathi literature.

Rajendra Kondhare, the general secretary of the Akhil Bhartiya Maratha Mahasangh, said Naxals are trying to take advantage of the ongoing unrest within the community.

Ravindra Kadam, former Joint Commissioner of Police (Nagpur) who also held the additional charge of anti-Naxal operations, said the use of WhatsApp to reach target is dangerous, as the source of origin of the communication is difficult to trace.