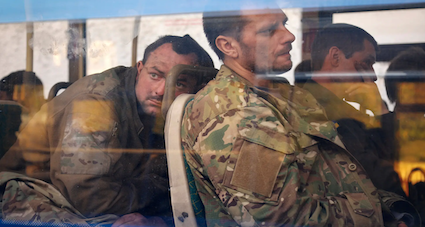 The New York Times prevaricates as follows: Ukraine ended its “combat mission” in Mariupol and said fighters were being evacuated, signalling that the battle at a steel plant was over.  (Russia call it “mass surrender”).

Zelensky adds some Ukrainian/Cocainian dreams to that: “The evacuation mission from Azovstal continues. It is led by our military and intelligence officers.” (OK, what if they’re being led straight into war criminal prison!)

Dmitry Polyansky says it differently: “I didn’t know English has so many ways to express a single message: the  #Azovnazis have unconditionally surrendered.”

Nightfall did not stop the surrender process. Ukrainians are still surrendering in crowds without stopping. Sufficient forces to deal with this are on the terrain and the Ministry of Internal Affairs of the DPR are kicking butts and taking prisoners.

Illumination rockets are constantly launched into the sky, which at least somehow facilitates the crawling out of underground inhabitants :

These invincible heroes are emaciated, ragged, hungry and a pitiful sight. This is the start of a mass surrender.

This is denazification and movies will be made and books will be written. After this major loss of prestige, expect a doozy of a false flag.

Secrets from Azovstal and surroundings are beginning to be revealed. There will be many!

One of it is how OSCE (Organizatiaon for Security and Cooperation in Europe) collaborated with the Azov terrorists. Among other valuable finds, the filming crew of IA “Arbelet” found two mortar positions of Italian origins, as evidenced by the markings. The last delivery of the Italian mortars is dated March 11, 2022.

Do ordinary Italians know that their authorities are helping outright terrorists of the national battalions? How will the OSCE comment on the fact that they were in clear collusion with the terrorists, allowing “Azov” to fire from their territory? How, after these facts, will the OSCE be able to clean up their reputation at all?

The Western sources are hoisting themselves on their own petard.

The Russian army attacked Ukrainian defense facilities in the Odessa region with precision weapons from the Black Sea. This information is confirmed by the Ukrainian operational command “South”.

The battlefront is still in a relatively chaotic state, but Russia is now forming and shaping it.

FM Lavrov: “Ukraine No one wants Ukraine. They are an expendable country in this hybrid war against Russian Federation. No one has doubts anymore”. The language from Russian sources has changed and they now say clearly that Ukraine is a tool and the fight is against Russia by the West.

Russian self-propelled howitzers “Msta-S” and “Acacia-M” are being put to good use and they destroy armored vehicles and fortified positions of the Armed Forces of Ukraine. Distance of fire is up to 30 km and they use high-explosive fragmentation projectiles that can destroy buried concrete fortifications of the enemy.

Incoming weapons. On the Polish-Ukrainian border, seven South African-made Mamba Mk2 EE armored vehicles transferred to Ukraine by Estonia as military assistance were seen. These vehicles were specifically produced for the Estonian army.

There are other noteworthy news.

Washington fails to get summit with the ASEAN countries to condemn Russia’s invasion of Ukraine.

(This piece is courtesy TheSaker)