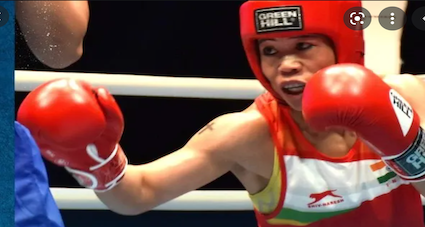 Indian boxer Mary Kom was eliminated after she lost her bout to Ingrit Valencia in a split decision in women’s fly (48-51kg) round of 16 in the Tokyo Olympics on Thursday.

However, Rio Olympics silver medallist shuttler PV Sindhu has stormed into the quarter-finals of the women’s singles badminton event.

Sindhu came up with a clinical display against World No. 12 Mia Blichfeldlt, beating the Danish shutter 21-15, 21-13 in just 41 minutes in her Round of 16 match at the Musashino Forest Plaza.

Indian men’s hockey team also qualified for the quarterfinals with a 3-1 win against defending champions Argentina in a men’s Pool A fixture.

Boxer Pooja Rani won her Round of 16 match and is now one win away from a medal place.

India’s Satish Kumar won his bout against Ricardo Brown of Jamaica 4:1 in the Round of 16 of men’s Super Heavy (+91kg) category to seal a quarterfinal berth.