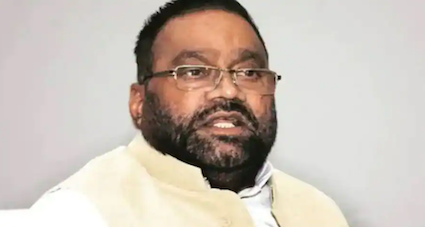 A day after he resigned from the Yogi Adityanath-led cabinet in Uttar Pradesh, an arrest warrant has been issued against former Bharatiya Janta Party minister Swami Prasad Maurya.

A court of Sultanpur has issued an arrest warrant in a seven-year-old case where Maurya allegedly made objectionable remarks about deities.

“Goddess Gauri or Lord Ganesha should not be worshipped during weddings. It is a conspiracy by the upper caste-dominated system to mislead and enslave Dalits and backward castes,” Maurya had said during his speech.

“Swami Prasad Maurya had to appear in connection with religious remarks he made in 2014. Allahabad High Court had granted stay on non-bailable warrant against him, it was valid till January 6. He had to appear before the court today but he didn’t. A non-bailable warrant has been issued against him. Next hearing will take place on January 24,” said Advocate Anil Tiwari.

Meanwhile, Uttar Pradesh minister Dara Singh Chauhan has also resigned and a total of six MLAs have now resigned in the state ahead of crucial assembly polls.