Mayanti Langer won’t be seen in the IPL 2020; reasons unknown 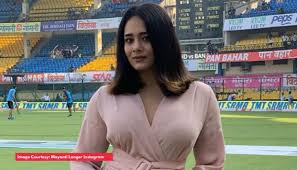 The Indian Premier League 2020 starting tomorrow in the UAE wouldn’t have cricket presenter Mayanti Langer in the anchors’ team.

Langer won’t be anchoring any games of IPL this season. The reason for her absence is unknown.

Several new faces have been added in the anchors’ team this year. Neroli Meadows, Fox Sports presenter, is part of this team. Other anchors include Suren Sundaram, Kira Narayanan, Nashpreet Kur, Tanya Purohit and Dheeraj Juneja

Tanya Purohit is also an actor who has featured in the Anushka Sharma starrer NH-10. Dheeraj Juneja has also worked as an anchor on several TV shows.

The opening match of the IPl 2020 would be between Mumbai Indians and Chennai Super Kings at 7.30 p.m, IST.