Mayawati calls Rahul Gandhi a liar: “He is following in his father’s footsteps” 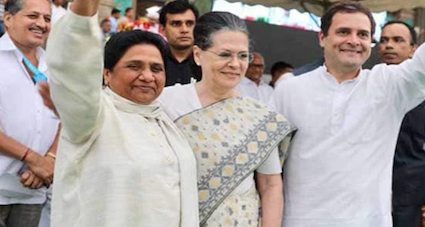 Bahujan Samaj Party (BSP) chief Mayawati has termed Rahul Gandhi’s claim that his party, Congress, had asked about the alliance and offered the post of chief minister to her as a lies.

“Rahul Gandhi’s allegations of BSP being afraid of BJP & that they asked us about the alliance & offered CM post to me & that I didn’t respond is outrightly fallacious,” said Mayawati on Sunday.

Mayawati said that the comments made by Rahul Gandhi showed his malevolence towards the Dalits, backward classes, and the BSP. She said for years, Congress kept these communities deprived of a fair share in the central schemes, including reservation. “They kept the backward section dependant on others,” she added, “The former Congress President is unable to keep his own house in order, and now he is trying to intrude into our matters.”

Mayawati recalled how Rajiv Gandhi had called the founder of BSP, late Kanshi Ram, an agent of the CIA, allegedly to demean the party. “Following his father’s footsteps, Rahul Gandhi nowadays keeps hitting BSP by alleging that the BSP chief is scared of CBI, ED, and Pegasus hence siding with BJP,” Mayawati said.

Mentioning Gandhi’s earlier statement where he claimed Congress had approached BSP for an alliance, she said, “Yesterday, Rahul Gandhi said that Congress had approached BSP for an alliance and offered the CM post to me. There is no truth in his statement. Every party should introspect after the UP Assembly elections results, but they should also avoid attacking other parties. Especially Congress should think 100 times about their own track record against BJP before commenting on BSP.”

She added that even if she forgets about the betrayal BSP faced at the hands of Congress in states like Madhya Pradesh, she cannot see Congress fighting with all its will against BJP anywhere. She also claimed Congress did not support her when she was Chief Minister of UP from 2007 to 2012. She said, “When I became CM in 2007 and Congress was in the Center, they stopped a lot of projects in UP with a feeling of hatred towards my government.”

She said during that period, the verdict on Ram Janmbhoomi was scheduled, but the Center did not provide any additional force. “They wanted to create unrest in the state so that they could impose President Rule and run the government themselves in UP from the background,” she said.