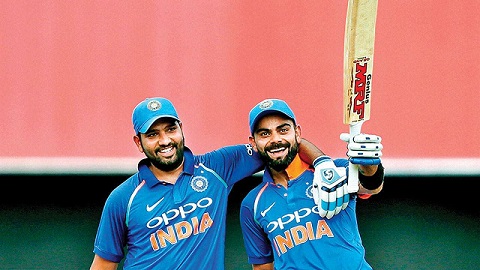 Australia great Glenn McGrath has no doubt that the absence of Virat Kohli for last three Tests during the upcoming series against Australia would be a big block to the visitors as well as to the paying public but the legendary fast bowler feels it could actually be an opportunity for Rohit Sharma to step up the plate.

“Rohit Sharma is a quality batsman who hasn’t achieved at Test level what he should be achieving in my opinion… Maybe when Virat goes home, he might step up. Having said that, you can’t just focus on one player. You have (Ajinkya) Rahane, (Cheteshwar) Pujara, (KL) Rahul, so there’s a quality batting line up. Once Virat leaves, it will be an opportunity for someone else to put their hand up and make a mark on the series. Maybe that could be Rohit Sharma,” Glenn McGrath was quoted as saying by Sportstar.

BCCI’s Selection Committee had decided to rest Rohit Sharma for ODI and T20I series to regain full fitness but included him in India’s Test squad for the Border-Gavaskar Trophy.

Virat Kohli flew to Australia from Dubai but the India captain will only play one Test, the opening day-night fixture in Adelaide, apart from the limited-overs series.

Kohli will be heading home to be with his wife and Bollywood actor Anushka Sharma for the birth of their child. McGrath said there is no doubt that Kohli’s absence will leave a major impact on the outcome of the Test series.

India’s tour of Australia will begin with the 1st ODI in Sydney on November 27. They will play the second ODI at the same venue two days later before moving to Canberra to play the final ODI and the first T20I on December 2 and 4 respectively The ODI series will be followed by 3 T20I fixtures before finally entering the Test leg which starts in Adelaide with a Day-Night Test from December 17.