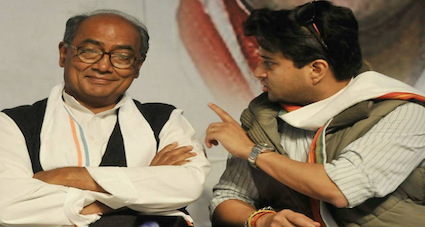 “Scindia took advantage of Congress and later joined BJP. He also took our MLAs with him by distributing money. History will not forgive traitors. The generations to come will remember the betrayers,” Singh was quoted.

However, responding to the “traitor” remark, Scindia hit back and said that people who called Osama Bin Laden as “Osama Ji” and promised to restore Article 370 were calling him a traitor.

“I don’t want to fall to that level… People who called Osama (bin Laden) as ‘Osama Ji’ and say that they will restore Article 370 when they come to power Public will decide as to who is a traitor, who isn’t.”

The Union minister also said that he cannot stoop to the level of the Congress leader, who is habitual of making such statements.

“He is a veteran leader. This is his habit. I don’t want to expose him and don’t want to stoop to his level. Something must have hurt him that he went to this level despite being old and mature in politics.”