Mehbooba is now on the margins of history: Her rant has few takers 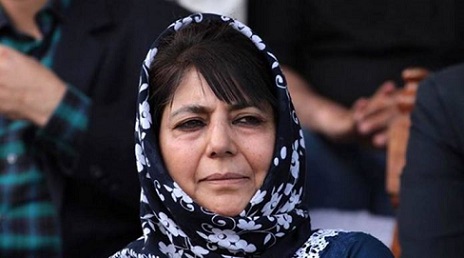 Mehbooba Mufti has a trait which no other contemporary politician can lay a claim to, being rabid in her choice of words, phrases and going to extremes. Particularly when describing those who are the target of her tongue lashing at any given moment. Hell hath no fury like a woman spurned, so goes the phrase which we often come across. At her best, she can nearly pass as an epitome of that colloquial saying.

On Wednesday, she talked of going to “International Court of Justice (ICJ)” for the restoration of special status of Jammu and Kashmir. As if approaching the ICJ on such issues is a walk on the Boulevard Road along Dal lake, or perhaps easier still, like a walk in Gupkar Road bungalow allotted to her when she was the Chief Minister! Almost 30 months after she ceased to be the CM, she is in unauthorised occupation of the official residence of CM!

Addressing reporters in Srinagar, Mehbooba said she is not in the race for CM-ship as she will not contest assembly elections till special status is restored. The irony was delicious in someone who claims to be not enamoured of CM-ship not letting go of the Fairview residence at Gupkar Road! How fair does that seem?

The bitter truth may be that with barely 4 (3.96%) votes in just concluded District Development Council (DDC) polls, People’s Democratic Party (PDP) has been reduced to a very diminished role in UT politics. Incidentally, the party share was nearly to 1/6th of 22.7% during the assembly elections in November 2014. Clearly, her party’s popularity is in free fall and waning rapidly, claims to the contrary notwithstanding.

She also talked of the possibility of being implicated in a “terror funding” case, much like Wahid Para, the youth wing president of PDP, who is behind bars presently. The context for the claim was provided by Enforcement Directorate (ED) raids on her aide Anjum Fazili’s residences in Srinagar and at New Delhi. In these raids, Rs 28 lakh was seized (over Rs 21 lakh and Rs 6 lakh, respectively) and raids were regarding alleged financial frauds being committed at Jammu and Kashmir Bank Limited.

It seems the raids have unnerved her as she asserted otherwise in the presser meant to celebrate the party’s pyrrhic victory in the DDC polls. In Chillai Kalan (period of severest cold for 40 days in Kashi), it seems she has been singed by the heat generated in these raids. She named her mother, a private person who hardly ever has been mentioned in public, and some of her close relatives as the next likely targets.

Wishes, or wishful thinking, or words both carelessly as also carefully uttered, sometimes do come true. In her case too, some of those Mehbooba named may actually face some problems in the coming days as some ongoing investigations make progress.

She earned a reputation for being arrogant in her working style while being CM and burnt her bridges with RSS, the ideological organisation behind the BJP. In 2014 campaign, RSS was the most vilified name in the Kashmir Valley during PDP campaign rallies. Ironically, the PDP embraced the BJP after the polls to form what his father, late Mufti Mohammad Sayeed, called “North Pole South Pole Alliance”.

The patriarch was a past master in explaining away such U-turns which many saw as a brazen U turn by saying it was a “political necessity” at that juncture. A sort of TINA (There Is No Alternative) political theory flogged during most elections three-four decades ago. This dexterity, a sort of Teflon coating, that the founder of the PDP had, is not to be seen in his heir. As long as he was around, the Daddy could keep her heady daughter out of harm’s way, by cajoling, or threatening, as he saw fit, those who were ranged against her.

Once she succeeded him as CM, due to his unfortunate death in January 2016, she rapidly made enemies, rather than friends, which he was adept at making, and frittering away his legacy. So much so that a sagacious man as Muzaffar Baig, and most other founder members, are no longer in the PDP. Many who were elected as MLAs in 2014 on PDP tickets, have parted company with her. Altaf Bukhari, just to name one, has founded Apni Party which won only a dozen seats in the DDC polls, but won 5.3% votes, more than her 3.96%.

A leader is one who leads from the front, and she is no exception when it comes to leading the PDP. But a leader is also one who lifts others by his/her midas touch, and dares to delegate responsibility and help fulfill their personal ambitions. As the PDP is today, there are not many left around her who may be polished and turned into winners before the next assembly elections.

Mehbooba’s brother Tassaduq Mufti had joined her cabinet after their father’s demise. His elevation and virtually becoming number 2 overnight served to alienate many powerful leaders who felt sidelined and cut to size. He was nowhere to be found in J&K politics today. Like a meteor, his rise and vanishing in wildnerness have both been spectacular.

Mehbooba has a small coterie of loyalists around her, mostly her close relatives, but it was her daughter Iltija Mufti who ran her Twitter handle while she was incarcerated for 15 months. Effortlessly, Iltiaja has become the No 2 now, and is being groomed into heir apparent, giving interviews on TV, and speaking about party’s stance on different issues. But for now, the Mufti dynasty in J&K doesn’t seem to be destined for heady days of the past two decades.