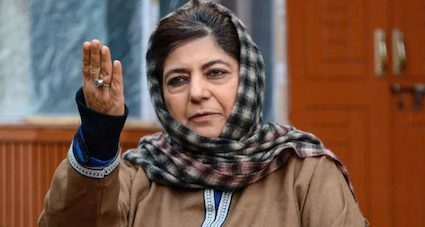 Mehbooba Mufti helped her father late Mufti Mohammad Sayeed build up People’s Democratic Party (PDP) from scratch in two years or so. She worked tirelessly, touring entire Jammu & Kashmir, focussing on Rajouri, Poonch and such other areas in the Jammu region. That was almost two decades ago in 1999 and thereafter, and on November 2, 2002, the patriarch had become the chief minister. The PDP had only 16 MLAs in 87-member legislative assembly as against the Congress which had 20 MLAs and Mufti’s rival for the CM’s post then was Ghulam Nabi Azad. But Mufti senior trumped Azad to the post, courtesy Sonia Gandhi siding with the former.

Three years later, Mufti moved heaven and earth (besides friendly media in Delhi) to stick to the post but Azad checkmated him, and became CM on November 2, 2005. Then also, Azad had to go against Sonia to rise to the top executive post in J&K as he has gone now in G23. Mehbooba has a simmering grouse against Azad and she tried to portray him negatively in her speech. She appears to believe that running down Azad a way to snuggle up to Gandhis, Sonia as also siblings.

The PDP-BJP coalition government formed on March 1, 2015, was a contradiction in terms, ideologically speaking, and was called North-South alliance. Mehbooba explained Daddy’s political somersault of aligning with the BJP as TINA (There Is No Alternative), not a variable of his personal ambition to be CM again. Today, she is going around the town talking in a language that borders on seditious, if separation of Kashmir from India can be categorised as that. On Wednesday, she said that Article 370 will have to be restored if India wants to keep Jammu and Kashmir with itself!

At one time, frequenting the houses of terrorists killed by security forces distinguished her from others. She virtually built PDP on the politics of mourning, with suitable incendiary statements thrown in. A green abaya draped over her head just fitted in snugly with the style, and substance of subtle, and not so subtle, messages she was delivering.

To complete the PDP packaging, the party symbol of kalam-dawaat (inkpot and pen) which was used by many candidates of now defunct Muslim United Front (MUF) in 1987 assembly elections came in handy. This symbol invoked images of Syed Ali Shah Geelani, Yasin Malik and the ilk among the hoi polloi in Kashmir and that was an advantage PDP could not allow to be frittered away. Incidentally, it may be of interest to many among us to know that Muftis draw a lot of supporters from Jamaat e Islami (Jamaat) cadres. Soft separatism was her USP, and she is inching back to it with a vengeance as a tried and tested formula to raise and harvest a new crop of supporters.

For effect, Mehbooba also said in her Banihal speech that the Kashmiris had hitch-hiked their fate to India of Mahatma Gandhi, in 1947, and not Nathuram Godse. Deliberately obliterating the fact that the rulers, and not the subjects, decided on the question of accession. She talked of a right that was non est ab initio, the right of secession.

She would do well to educate herself that right of secession was debated and thrown out of the book in the Constituent Assembly of J&K. This was something Abdul Gani Goni, a member from Bhaderwah, had deliberated upon a few years before her birth in 1959.

The PDP stands decimated today as it had witnessed wholesale desertions by its legislators, after BJP dumped her in June 2018. She says it took, India 200 years to shake off the British yoke of slavery, 70 years for the BJP to scrap Article 370 and may take 70 months for her to get it restored.

On Friday, it seems her prayers were answered, in an arena other than political, as J&K cricket team restored 370, scoring as much in 50 overs against a Bihar team! That was an honourable 370 which led to a thumping win of 144 runs.