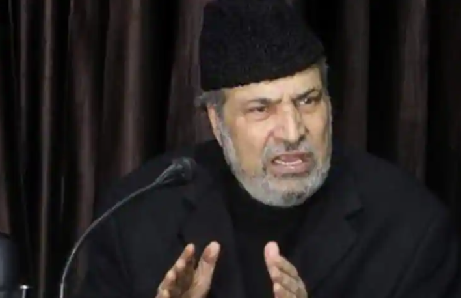 Senior political leader Muzaffar Hussain Baig on Saturday quit the People’s Democratic Party (PDP) led by Mehbooba Mufti. The resignation was apparently in protest against the seat-sharing of the party with other constituents of the People’s Alliance for Gupkar Declaration (PAGD). He personally called up Mehbooba to tell her that he was leaving the party of which he was the patron.

“National Conference (NC) is fighting on a majority of seats. It is not in the interest of the PDP. I respect Farooq Abdullah, Mehbooba Mufti and I wish them luck. I am leaving PDP on principle,” he said. In a way, Baig’s resignation may mean the fast unravelling of the party over the past two years. Most senior party leaders, and intellectuals that had come together to create it as an alternative to National Conference in Kashmir, have now left it.

In the forthcoming District Development Committee (DDC), PAGD constituents are fighting these elections together. In the seat allocation for the first round, PDP got very few seats and the most seats were bagged by rival NC. Imposing her will on other party leaders is possible for Mehbooba but not consulting Baig on most issues is what seems to have riled him no end.

Baig said he has communicated his decision to Mehbooba Mufti and told her that he was leaving PDP as patron and also a member. He added that he will consult his friends and well wishers regarding his future plans.

Baig’s wife Safina is president of the women’s wing of PDP. His brother Javaid Baig is a former MLA of PDP from Baramulla. Baig is a widely respected political leader from Kashmir who was one of the founder members of the PDP. He had served as deputy chief minister of Jammu and Kashmir during Ghulam Nabi Azad’s tenure as chief minister.

Incidentally, Baig was brought into politics by late Abdul Gani Lone, father of People’s Conference leader Sajad Lone. In 2018, Sajad had requested Baig to participate more actively in day to day happenings, and help him. Baig has very good relationship with Prime Minister Narendra Modi also and made a couple of speeches in Parliament as PDP MP which had not gone down well with the Muftis.

Baig had drafted the “self-rule document” of the PDP which is considered the party’s vision document for India, Pakistan relationship. It lays stress on rendering “borders irrelevant” between the two neighbours. It also means easing travel restrictions and enhanced trade. Baig had drafted the constitution of People’s Conference also and is perhaps the only politician to have worked as ideologue for two different parties.

Baig is acknowledged widely as one of the brightest lawyers not only in J&K, but across India. When Mufti Mohammad Sayeed became chief minister in March 2015, he, along with Mehbooba, had systematically undermined Beigh. He was considered a person who would not kowtow to anyone and capable of articulation of his independent views.

With Baig’s exit, Mehbooba is practically left without any founder members in her party. One by one, over the years, most of them have left PDP and the main reason was the treatment of the party as personal fief by the Muftis. Mehbooba’s abrasive style of articulation is something she has never adopted towards Baig who is known for his razor sharp intellect, and sauve demeanour.