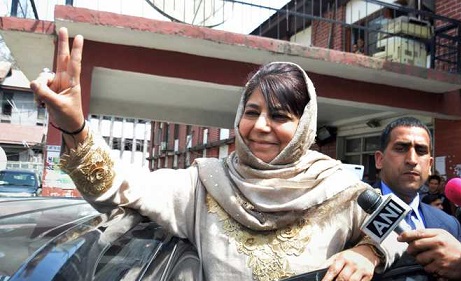 Former Jammu and Kashmir chief minister Mehbooba Mufti, now released, is back to using her trademark expressions which have always bordered on soft separatism. She has promised to come out with her plan in a press conference on Friday though it is no brainer she wants restoration of Article 35A and 370. But whether it’s by seeking China’s help, as another Valley dynast Farooq Abdullah has recently done, or on the lines of Gupkar Declaration, one would only know in coming days.

Mehbooba always stoked fire by symbolism which was typical of her. Like visiting families of slain terrorists. If she resorts to same tricks, she probably has still not reckoned with the resolve which Centre has on matters of Kashmir Valley. Frankly, Mehbooba is now in a new Kashmir.

People’s Democratic Party (PDP) chief Mehbooba was released from detention after 14 months on Tuesday. The announcement was made by her daughter Iltija Mufti who operates Mehbooba’s official Twitter handle. Iltija is widely considered as a third-generation scion of Mufti family who is being groomed as her mother’s closest political aide and successor nowadays.

Mehbooba’s release was welcomed by her political rival Omar Abdullah who said that her continued detention was against democratic norms. CPM leader Yusuf Tarigami said that it was time that all those detained around August 5, 2019, be released. Many of them were detained within Jammu and Kashmir but some of the detainees were sent outside also.

Mehbooba, National Conference patriarch Farooq Abdullah, his son Omar and Mehbooba were put behind bars almost simultaneously. Later, Public Safety Act (PSA) was slapped on all three, besides several other leaders of the NC, PDP and other parties. However, Farooq and Omar were released in March this year, much ahead of Mehbooba.

Immediately after her release, Mehbooba said that she would work for restoration of pre-August 5 status of J&K. On August 4, 2019, several Kashmir-based political leaders had met at Gupkar Road residence of Farooq and passed a resolution. It had mainly focussed on warning the Central government against fiddling with the “special status” of J&K under Article 35 A and 370.

Despite “Gupkar Declaration” and dire warnings emanating from these leaders, the Centre had abrogated 35 A and restated 370 rendering it ineffective. Severe restrictions were put on the movement of people, mobile and landline phone services were disrupted in the run-up to the constitutional changes. Gradually, in a staggered manner, many politicians were released, some on furnishing bonds of “good conduct”.

Mehbooba is scheduled to address a press conference on Friday (October 16) the time for which has not been communicated to media so far. During the presser, she may unveil her plans for future political activities to be undertaken by her party.

All through her detention, her brother Tassaduq Mufti has remained conspicuous by his absence from public domain. Not a word has been heard from him ever since the PDP lost power after the BJP withdrew support to it in June 2018. At one time, he was Tourism Minister of J&K and his elevation had caused serious rifts within the party.

He was considered a part of the coterie around Mehbooba which included her maternal uncle Sartaj Madni and some party leaders considered close to her late father Mufti Mohammad Sayeed. They had apparently become powerful because of their proximity to Mehbooba and not because of any political standing among the masses.

This was an irritant which had led to powerful party leaders Imran Reza Ansari, his uncles and Basharat Bukhari leaving the PDP. Several other leaders of the PDP had also left it to join other political parties. As such, the first and foremost task before Mehbooba will be perhaps to build her party back into a fighting political unit. Ironically, this time too a family member, her daughter Iltija, is going to be the Number Two after Mehbooba. In dynastic politics, as elsewhere, it may be true that as more things change, more they remain the same.