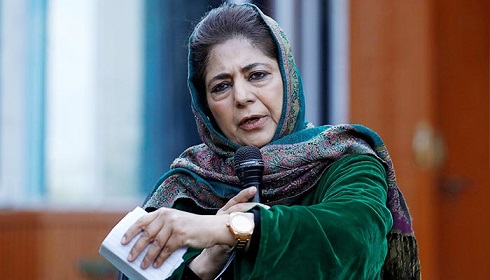 Mehbooba Mufti seemed resigned to her fate as she claimed the high poll percentage recorded in the first phase of the Delhi Development Council (DDC) polls had no significance or meaning. That the Kashmir problem was there and polls were no solution to it.

This was vintage Mehbooba Mufti, chief of People’s Democratic Party (PDP), in a presser in Srinagar on Sunday. She was addressing media on the day after the first phase of the District Development Council (DDC) went through.

She alleged that her party candidates were not being allowed to campaign in the name of security threats. That she herself was not allowed to go out and move freely, again on the same alibi.

She accused the BJP of calling Sikhs as Khalistanis, Muslims as Pakistanis and Kashmiris as terrorists. That any activist opposing the party were designated as Anti-Nationals and Unlawful Activities (Prevention) Act was slapped against them.

Mehbooba said the Centre was not talking to Pakistan because it was a “Muslim country”. She conveniently glossed over the fact that though India has excellent relations with most Arab nations, all Muslim nations.

Referring to Roshni scheme/scam, she said the law was passed during the NC government. She said that it was then taken further during Ghulam Nabi Azad’s time, again choosing to be economical with truth that it was amended during her father’s time too in 2004.

Mehbooba claimed youth PDP president Wahid Parra, now in custody, was a great votary of peace and dialogue. She added that he and other members of her party were targeted after they decided to participate in the DDC polls. “Had the PDP boycotted these polls, our leaders would have been called Pakistanis. Now that we are participating in these elections, we are still being targeted,” she said.

The PDP chief can perhaps sense now that her party has been marginalised after the loss of power. The emergence of Apni Party led by her former colleague Altaf Bukhari and People’s Conference (PC) of Sajad Lone have also pushed her to the margins of Kashmir politics. Her party’s bete noire, the NC, is also emerging as the most visible Kashmir-based regional party these days.

With no visible recognisable face left by her side, after the resignation of veteran Muzaffar Beigh, she is left all alone. She could build her party the first time two decades ago by projecting it as an alternative to NC. Rebuilding it may not be an easy task as there is more than just NC in Kashmir to contend with now.

Some of Mehbooba’s statement reminded one of 20 years ago when she was building her party. At that time, she had left the Congress, along with her father, late Mufti Mohammad Sayeed. Her party was those days projected as an alternative to the National Conference (NC) headed by Farooq Abdullah.

An alternative to NC it did prove as Mufti became the CM of Jammu and Kashmir in November 2002 though his party had won only 16/87 seats in the Legislative Assembly elections. The party has lost many of its leaders over the last over two years since June 2018 when she lost the chief ministership of J&K. The desertion by senior party leaders has gone unabated throughout this period, with most founder members leaving it.