Mehbooba spills the beans: Why BJP pulled the rug from under her feet 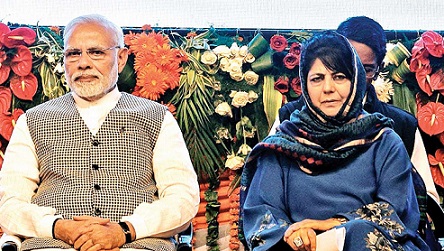 Taking a tough line against militants, the BJP wanted that bodies of militants, whether local Kashmiris or Pakistanis, should not be handed over to their families. People’s Democratic Party (PDP) chief Mehbooba Mufti said in Srinagar on Tuesday that this was not acceptable to her. Besides, the BJP wanted a tough line to be adopted against Jamaat e Islami and Public Safety Act (PSA) to be used widely.

The hardline suggested by the BJP against handing over bodies of militants became the tipping point and these differences led to the fall of her government, Mehbooba claimed. She had also withdrawn cases filed against over 12,000 stone-pelters and this had caused a major embarrassment to the BJP which favoured a muscular approach towards miscreants.

Former Deputy Chief Minister Kavinder Gupta said that the PDP and BJP had major differences on this, and many other issues. Gupta was brought in as Dy CM in April 2018 in place of Nirmal Singh who was made Deputy CM on March 1, 2015. However, this was just a deception plan of the top leadership of the BJP to create a sense of invincibility in Mehbooba before pulling her down, sources said.

Even Singh and Gupta, who swapped places as Speaker of the assembly and Dy CM, were not aware of this. A major catalyst in Mehbooba’s downfall was the aggressive line she adopted after the infamous Ressana case. This case had led to a lot of bad blood between the PDP and the BJP, and by March 2018, it had been more or less decided that Mehbooba must go.

Further, it was acutely felt at that time among the senior BJP and RSS leadership that PDP was crossing too many red lines. There were many who felt that there was no reason to allow the PDP to rule for all six years. The PDP had 28 MLAs of its own and the BJP also enjoyed the support of 28 MLAs (25 of its own, one party rebel and two of the People’s Conference). Despite this, the lion’s share in ministries and the CM-ship was to be with PDP for all six years.

All these realities contributed in the BJP walking out of the alliance that it had formed with the PDP after 2014 assembly elections. Ideologically, there was nothing much common between the two partners and for obvious reasons, it was called Noth Pole-South Pole alliance.

Mehbooba was least expecting the withdrawal of support in June 2018 as she was supremely confident after the reshuffle in the BJP ministries. Those in the know of things said that she had been marked out as early as January 2016 as “extremely unreliable and temperamental”. This has happened after she refused to take charge as CM following her father’s demise.

A section of the BJP at the Centre hardened its position thereafter and wanted to renegotiate the terms and conditions of the alliance. The BJP could have pulled out of her government much earlier perhaps if it were not for the Ressana case. The BJP was waiting for an opportunity to send her packing but wanted to wait for an opportune moment.

Mehbooba may have talked about her differences over issues with the BJP now, but the latter has preferred silence so far. There is now speculation whether the coalition could have completed its term. Given the manner in which the PDP had pulled down Ghulam Nabi Azad’s government in June-July 2008, the BJP was clear that it could not give free run to the PDP.  Incidentally, the PDP had withdrawn support to Azad government even as it had some months of its tenure left.

Differences over approach in dealing with militants just provided the ideal opportunity to the BJP to bring curtains ‘on Mehbooba’s days as the CM. There were too many sore points between the two parties earlier also but the disposal of bodies of militants did prove to be a trigger.