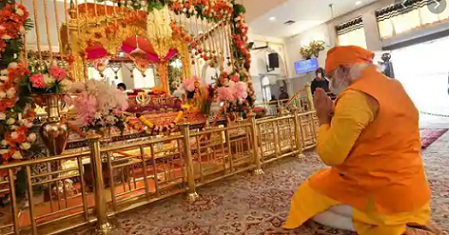 The video of Modi’s unscheduled visit is shared widely on social media. Reports suggest no barriers or restrictions were placed on worshippers during the PM’s visit.

Modi was to share his pictures on twitter later. “The Guru defended the Hindu religion and gave the message of universal communion,” he tweeted.

Modi has also tweeted yesterday on the occasion of Shaheedi Diwas, the day when Guru Tegh Bahadur was martyred.

Guru Tegh Bahadur was publicly beheaded by the Mughal emperor Aurangzeb in Delhi for refusing to convert to Islam.

In Delhi, Gurudwara Sis Ganj Sahib and Gurudwara Rakab Ganj Sahib mark the places of his execution and cremation of his mortal remains.