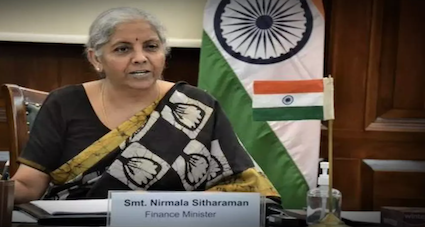 Indian Finance Minister Nirmala Sitharaman has said that money laundering and terror funding are the biggest concerns when it comes to crypto transactions. Speaking at a seminar on Digital Currency titled “Money at a Crossroad: Public or Private Digital Money?” on the 18th of April, she talked about the need for collective monitoring of crypto transactions to ensure the funds are not used to fund terror or for money laundering. FM Sitharaman is currently on a US trip for International Monetary Fund (IMF) annual spring meetings.

Speaking on the current status of the crypto markets in India, FM Sitharaman said that it was only in the 2022-23 budget that the Indian government a 30 percent tax on income generated by transactions of crypto assets. Sharing the government’s plans for the digital currency, she said, “We don’t recognize those which are outside of the central bank. The central bank is yet to come up with a digital currency. It will happen in 2022-23.”

As India has no plans to recognize cryptocurrencies as a currency that is backed by the bank or the government, the tax was imposed on them as assets. FM Sitharaman made it clear that imposing a tax on the crypto assets did not regularise them, and the central bank (Reserve Bank of India) is yet to come up with regulations for the cryptocurrencies.

Speaking about the tax on crypto, she said that the government was not sure how to track these transactions as a large chunk of them are being done via un-hosted wallets. She said the 1% tax that is deductible at the source of the transaction is not in addition to the 30 percent tax on crypto assets. The tax at the source will help the government to keep track of the transactions, and it is reconcilable with a 30 percent overall tax on the income via crypto assets.

She said, “We are trying to keep track of the transactions and making sure that these transactions comply with anti-money laundering rules. We are also making sure that these operations do not end up inadvertently funding any kind of terror activities. We wanted to make sure when there are no regulations, and as these transactions are becoming fairly large, we keep an eye on them. There should be financial implications for them. We have not legitimized them. They have no intrinsic value but certain operations are taxable for the sovereign of the nation. Thus we did this [imposed tax].”

The risks around crypto transactions

FM Sitharaman said when it comes to the nongovernmental domain, the risk that worried her was the un-hosted wallets across the globe. She said, “Regulation cannot be made by a single country. It has to be done collectively across borders. Every case needs a different approach as risk factors would be different depending on the case. As long as transactions happen through un-hosted wallets, monitoring will be very difficult.”

She said that central bank-driven digital currencies will make cross-border payments easier. It helps in improving efficiency, transparency, and better management. However, the protocols that were in place two years ago were very different from those in place today. “Unless there is a global approach at regulating, and also an understanding of technology as it keeps evolving, it will not be possible to regulate.” She added that the government is not interfering but only monitoring the transactions to ensure that these are not used for money laundering or funding terror activities.

During the seminar, FM Sitharaman said that India has spent a lot of time building the digital infrastructure framework. She mentioned, “We have ensured that we have brought in the data security and data privacy elements and created what the India stack is.” She added that the system is an indigenously developed technology-driven enabler that allows the innovations coming across for creating platforms such as the API platform to support digital infrastructure.

She talked about the biometric system Aadhaar that was used to authenticate the beneficiaries’ bank accounts. It helped the government to eliminate ghost accounts, and the benefits were directly transferred to bank accounts via Direct Benefit Transfer or DBT. She added that a similar digital platform was created for the GST network as well.

The government funded and developed the system, and the private sector also came into play for the common collective good. Speaking about the digital adoption rate in India, she said that in the year 2019, it was 85 percent in India, while the rest of the world saw only 64 percent digital adoption.

FM Sitharaman noted that during the Covid-19 pandemic, the government of India was able to test and prove that digital infrastructure adoption can happen in the country. She said, “Common people used it in a big way. The government used it for DBT. As the transparency increased in payments to the beneficiary, the confidence was built.”

She further added that 299 million (29.9 crores) people in rural India became digital savvy, and recently, India added 135 million (13.5 crores) people to the network and those people do not own smartphones but only feature phones. She was referring to the 123PAY UPI payment system that does not require a smartphone for digital transactions.