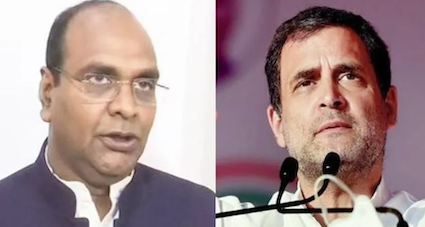 After Rahul Gandhi supported the World Health Organisation (WHO) report which claims India’s COVID death tally to be nearly 10 times more than the official record, Madhya Pradesh Medical Education Minister Vishwas Sarang slammed the Wayanad MP for endorsing the misleading allegations to which, the Centre had earlier raised strong objections.

Terming Rahul Gandhi’s act ‘sedition,’ Vishwas Sarang, while speaking to ANI, said, “Rahul Gandhi is endorsing the misleading report of WHO by tweeting, it comes under the category of sedition. Whatever we do politically, when it comes to our country at the international level, we should talk apart from party politics.”

Sarang further lambasted WHO and stated that when the country accomplishes good work, some conspires against us. “If India does good work, some countries conspire against us. WHO has submitted a report (on the number of deaths in India due to COVID-19), which has been rejected by all health ministers. The figures WHO have given are without any facts,” Sarang said.

WHO recently reported that India suffered 4.7 million “excess” deaths between January 1, 2020, and December 31, 2021, owing to COVID. Despite the Centre rubbishing the argument, claiming that the data provided by the WHO was inaccurate, Congress leader Rahul Gandhi came forward backing the same. Reiterating the data brought forth by WHO, Rahul accused PM Modi of spreading false data. Following the WHO report, Rahul Gandhi on Friday tweeted the same data and said that the government was releasing misleading data to the citizens.

It is significant to mention that Health Ministry along with ICMR, and AIIMS have rejected the claims presented in the WHO report.