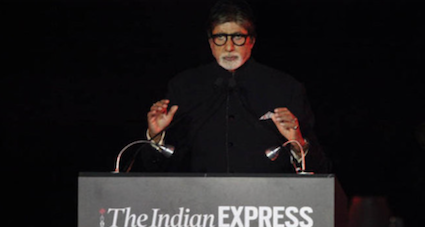 Ordinary citizens all over India remembered the martyrs of 26/11/2008 by organising functions to pay tributes to them. Reports in the newspapers talk of how 10 Lashkar e Toiba terrorists had wrought havoc on Mumbai, the financial capital of India, 13 years ago. At most places, a very special mention is made of martyr Tukaram Omble, an assistant sub inspector (ASI) of Mumbai Police. Omble’s action of confronting Ajmal Kasab, one of the attackers, had led to his capture though he had taken 40 bullets at close quarters and died.

Things could have been different had Omble not held on to the barrel of Kasab’s gun, refusing to let go. In 2009, a grateful nation had conferred the highest peacetime award of Ashok Chakra on Omble posthumously. Incidentally, it is equivalent to Param Vir Chakra (PVC) awarded in war time to soldiers. There were solemn functions, many in Mumbai too, and Amitabh Bachchan is one actor who has shared his thoughts on the occasion.

In The Indian Express dated November 26, Bachchan wrote a long Op Ed with the heading: Are we ready to tell new stories? As an inset blurb, the Indian Express extracted a couple of sentences from this write-up and obliquely it seemed to vindicate what Manmohan Singh had done at that juncture: Nothing!

The blurb says: “In the immediate aftermath of 26/11, India acted with remarkable sobriety and restraint. Despite immense pressure, it did not give in to the temptation of military retaliation against Pakistan – even as the capture of Mohammad Ajmal Kasab and the revelations of David Headley stripped Pakistan’s military-ISI establishment of the alibi of non-state actors beyond its control, and left it with no fig leaf. India gave a normal legal trial, and accorded due process to the one surviving attacker, even though evidence of his guilt had been splashed on all our TV screens. We made it clear: Those who had died in the attack, the brave-hearts defending us, had died because of our commitment to justice and Constitution.

Appalling, that is the first word that comes to mind on going through the blurb as also the entire article. Not a language that our adversary Pakistan, or Miltablishment (a term coined by Najam Sethi of Friday Times) that uses terror proxies to this day against us, understands. It understands the language that was used within a fortnight of the Pulwama attack of February 14, 2019. On February 27, Squadron Leader Abinandan Varthamaan had lost his MiG 21 while defending Indian skies and fell in enemy territory, was captured and his images flashed all across the globe.

He was set free later and walked his way back via Wagah border on March 1, not because of Pakistan’s generosity as is made out by some. He was honourably returned because Pakistan government had been conveyed in no uncertain terms the consequences of not releasing him. Some say that night by 2 am, a multi-pronged attack would have been launched at multiple locations inside Pakistan. All elements of the armed forces had been put on alert, and select formations were ready to go: Pull the trigger.

Between February 2019 and now, we have had a relatively better time vis a vis Pakistan, and its proxies, despite some incidents. Not because of a display of “sobriety and restraint’’ which Amitabh alludes to, but rather the exact opposite, conveying in no uncertain terms that we are now trigger-happy. Amitabh has built his fan following and money, both running in crores, not because he portrayed Manmohan’s pusillanimity, but a macho image. Action against inaction, as he preaches now. Right from the 1969 release “Saat Hindustani’’ of K A Abbas in which he played daring Anwar Ali.

His biggest blockbuster of 1975, Sholay, is about action in the face of adversity. Not inaction as he argues in real life. He could well have remembered late Bala Thackeray, who is credited with having saved Amitabh’s life once. Around 1990, Pakistan-sponsored terrorism was mint fresh in Jammu and Kashmir. Amarnath yatra was going on and one day there was an ultimatum from terrorists that the pilgrims would be liquidated. In his characteristic style, Balasaheb responded in real life to that challenge. He pointed out that 99 per cent of Haj pilgrims flew out of India from Mumbai. Without mincing words, he said if the Amarnath yatra was disrupted, it may not be possible to operate haj flights out of Mumbai.

The roar of the tiger had a salutary effect and the yatra continued uninterrupted. This stance of the Shiv Sena supremo, another true blue Mumbaikar, is brought into question decades later as Amitabh plays the pacifist. For Amitabh, there are new stories that need to be looked. Of Virat Kohli hugging Babar Azam after the recent T20 defeat, or Salman Khan raking in moolah by making Bajrangi Bhaijaan!

Get real, Mr Bachchan, those 166+ people martyred on 26/11/2008 were not stories. Don’t denigrate their memories by saying they are nothing better than stories. Perhaps, he could have paid a better tribute using his acting skills like Anupam Kher did in a film on 26/11 incidents. It feels good that one has watched few films during the past two decades. Most recent being Mumbai and Tanaji in Juhu a couple of years ago, not very far from where the screen superstar lives.

Towards the end, Amitabh writes: No terrorist must be allowed to change the way we are in the dark, or with our neighbour, or ourselves. No single act of terror must be given the power to destroy the interconnectedness of our stories, our plural solidarities.

It is not a single act of terror, as he says, which has brought us where we are. But dozens, scores and hundreds of killings and incidents. Incidentally, the planners of 26/11/2008 Mumbai massacres are roaming the streets in the neighbour’s courtyard. Till date, 13 years later, they have not been tried and brought to book. Get real, Sir, and let us hope that not many endorse you on this one.

Post Script: In the commercial world that we live in, Indian Express, in association with Facebook, asked Wizcraft International to organise the “Stories of Strength” on 26/11 for the first time in 2016. Call it docility or agenda of a few, the narrative plays into the hands of Pakistan’s military-establishment.