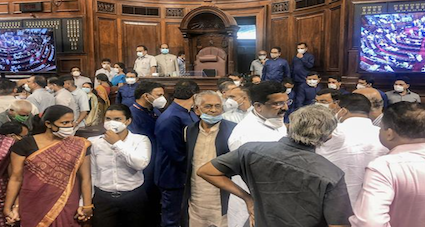 Congress leader Rahul Gandhi was aghast: “For the first time in the history of our country, members of the Rajya Sabha were manhandled and physically beaten. This was nothing short of murder of democracy.”

And so was Sharad Pawar of NCP who is his partner in Maha Vikas Aghadi government in Maharashtra: “In my 55 years of parliamentary career, I never saw the way the women MPs were attacked today. More than 40 men and women were brought into the House from outside. It is painful. It’s an attack on democracy.”

Less known names, but still parliamentarians, both of Congress, Chhaya Verma and Phulo Devi Natam asserted that male security personnel had manhandled them while they were protesting in the Well of the House.

This all related to ugly scenes in Rajya Sabha on Wednesday. Well, the tapes have now been accessed which show that it was not marshals but Opposition MPs who indulged in violence and physically manhandled even the lady marshals.

The tapes show the marshals, dressed in blue, trying to keep the parliamentarians at bay while some of them try to push their way towards the Chair. Some of the MPs are seen raising slogans, throwing papers and manhandling the marshals. This is how the sequence of events in the Parliament footage taps show and bring to light the hooliganism of the Opposition.

The day had begun with the Opposition parties staging a walkout after crying foul over the presence of security personnel during the passage o the General Insurance Business (Nationalisation) Amendment Bill, 2021.

According to Kharge, the the number of Marshals exceeded the ones of MPs. He also had lamented that women are unsafe even in the Parliament.

Piyush Goyal meanwhile has asked for a special committee to be set up to probe the incidents of “gross indiscipline” by opposition members and strict action to be taken against them.