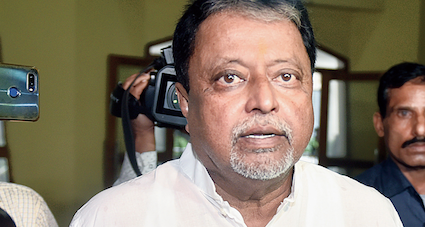 The multi-crore Saradha chit fund scam accused Manoj Nagel, in an explosive allegation, accused Mukul Roy of forcefully extorting a whopping amount of Rs 80 crore from one Sudipto Sen, the head and founder of the Saradha Group.

“I have informed this to the CBI officers. But still Mukul Roy is moving around freely. If necessary I will give a confidential statement to the court. But my request is that whoever gives a statement in this matter should be provided with adequate security. The Saradha case must come to an end now,” he said.

Nagel, presently under custody since 2013,  also added while extortion of Rs 80 crore was an event of just a day, nobody “knows how much he has extorted throughout the year.”

It was alleged that he had joined the BJP because he was under the threat of the CBI probing the Saradha chit fund scam. It was then indicated that he joined the BJP to save himself from being behind bars like his peers — Sudip Bandyopadhyay, Tapas Pal, Madan Mitra, and several others intertwined in the scam.

BJP’s state general secretary, Sayantan Basu, also launched the scathing attack on Roy, mentioning that he neither has credibility nor any acceptability.