Muslim Brotherhood is in India now: Beware, its fronts could be your “friends”! 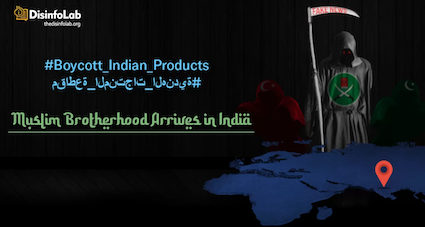 Muslim Brotherhood has arrived in India and a few of its fronts could be your friends on social media: You have been warned.

Who is Muslim Brotherhood? It’s a dreaded terrorist organization in Middle East which carries out bombings and political assassinations and also abetted the 9/11 in the United States. Several of its top functionaries are in the US Terror Watch List. It’s been banned in Saudi Arabia and the UAE, among others.

Muslim Brotherhood largely looked to infiltrate Western society and radicalise the intellectual discourse. But now India is on its radar because of its growing proximity to Saudi Arabia and UAE and it has enrolled “researchers”, “scholars” and “media/journalists” to brand India as an Islamophobic country.

Now India is becoming the hub of its activities and its infiltration is being promoted by Qatar-Turkey-Pakistan nexus to enroll radical Islamists.

The modus operandi appears to divide India and weaken its growing economic clout in countries such as Saudi Arabia and UAE which would hurt these Middle East countries as well and benefit nations such as Qatar, Turkey and Pakistan which in turn would keep funds rolling for dreaded Islamist networks such as Muslim Brotherhood.

A week back, a trend was observed on social media (#BoycottIndianProducts), which was essentially in Arabic but also in English and the trigger was the eviction drive in Assam which led to violence recently. The trend was shown to be a coordinated one as twitter handlers in Turkey, Pakistan, as well as in Egypt and Iraq, also flooded social media with #BoycottIndianProducts call, including the hashtag of #IndiaIsKilliingMuslims. These hashtags were replete with fake videos and posters—any random video of violence from India was dubbed as “Hindus’ atrocity on Muslims.” The idea was to create an impression of large scale violence against Indian Muslims.

(A series of fake images and videos, found out by fact-checkers could be found in the report).

It was no different to Tablighi Jamaat incident in India when it trended #IslamophobiainIndia on social media, impersonating accounts of upset Middle Eastern nobility. However, these accounts were later found to be fake. But by then traction was gained about Islamophobia in India.

Interestingly, this #BoycottIndianProducts has kept appearing on social media in successive years of 2018, 2019 and 2020. Only, this time it appears that Muslim Brotherhood has been roped in in the dangerous campaign.

An investigative report, names these handlers with identical methods and messages but worryingly is also repeated ad nauseam by some prominent media organizations, including Qatar-based Al Jazeera. It would’ve been alright if they were “reporting” about the boycott. Instead, it was actively “promoting” the modus operandi.

For instance this global media outlet kept on recycling the Assam story and #IslamophobiaInIndia and #BoycottIndianProducts every six hours on twitter. All its major portals, i.e. Al Jazeera Global, Arabic, Kuwait, Turkey and Egypt kept hammering on the matter. This media organization in the past had shown Jammu and Kashmir as not part of India. Worse, it didn’t show even Lakshadweep and Andaman Islands as Indian territories!

Interestingly, the US has registered Al Jazeera as a foreign agent. The Justice Department says AJ+, a media outlet backed by the royal family of Qatar, engages in “political activities”. Several of its journalists are alleged to be members of Muslim Brotherhood, some even on terror watch-lists.

This news channel is state-owned Turkish public broadcaster. It too has gone hammer and tongs on #BoycottIndianProducts. It also launched a promotion of the news article through TRT Arabia, which ran a Facebook Ad, and left no-one in doubt about the agenda. TRT World has shared several fake news in its portal, targetting India.

As is the case with such endeavors, fake news is almost always part of the package. TRT World has also shared several fake news via its portal targeting India [33] . Incidentally, TRT’s fake news are not only limited in targeting India, but to other countries who may not be in the good books of Turkish government, which owns the media. There are other Arabic news media outlets which could be found in the report.

Pakistan, predictably, is on the forefront of this misinformation campaign. Sometimes, it is a “dossier” against India on Kashmir presented by Pakistan’s foreign minister Shah Qureshi. At other times, its’ minister Fawad Chaudhari who is making the outlandish claim of New Zealand cricket tour being cancelled because of India’s machinations. It’s comic, almost a spoof, but the attempt is to keep repeating lies till they get stuck in masses’ mind.

No wonder, many Pakistan handlers, known as 5th Gen Warfare leaders, are leading the #BoycottIndianProducts bandwagon with gusto. Series of tweets are showing India as an Islamophobic and terrorist country. Some eminent Pakistani journalists, like Aman Ur Rehman and Shahid Raza, are doing their bit in this campaign.

There was even a Twitter Space hosted to promote the campaign. It included Muzaammil Thakur, son of Dr Muhammad Ayyub Thakur who funded terrorism and separatists in India from London. The other notable name was popular Twitter user Brumby, reportedly based out of Australia.

Not India Alone, Saudi Too Is Main Target

The “leader of Ummah” has remained one of the most contested titles in Islamic world, particularly between Saudi, Turkey and Iran. Turkey stands to gain the most if the other two weaken and hence Muslim Brotherhood is doing their bidding.

This Muslim Brotherhood and Qatar-Turkey-Pakistan troika aim to dominate the Halal product market which is worth $3 trillion plus market. It has the potential to support another 100 years of terrorism for Muslim Brotherhood. Turkey organizes World Halal Summit (WHS) to shape the future of industry. Turkey is slated to host the 7th World Halal Summit and 8th OIC Halal Expo 2021 in Istanbul from November 25-28 this year. It even has a “sponsored” credit ratings which puts Malaysia on top as the Muslim friendly destination while Turkey was placed second. Saudi Arabia has got no rankings!

Pakistan too has its economic agenda. It’s fighting a losing battle over Basmati rice. A consignment of Pakistani rice was recently rejected by the European Union. So you have a lot of Pakistani handlers hash tagging #BoycottIndianProduct and offering Pakistani Basmati rice as an alternative.

All this agenda has India, along with its “friends”, Saudi Arabia and UAE on radar. The idea is to hurt all three through economic measures and gain Ummah ascendancy for Turkey, Qatar and Pakistan in the Islamic world. #BoycottIndianProduct thus serves multiple objects. These are the utopian vision of rebirth of the Ottoman Empire. France too is on their target.