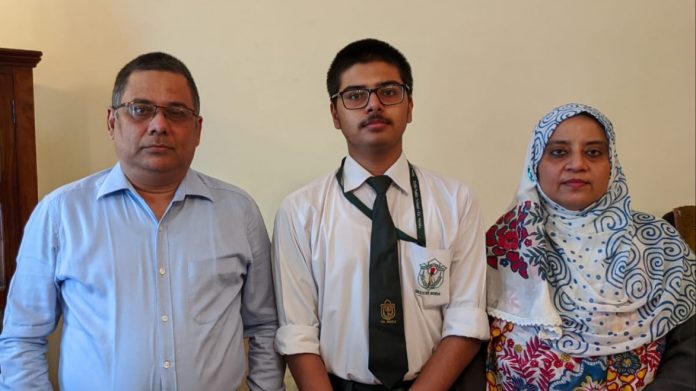 A young Muslim student of DPS Greater Noida, Muhammad Zaid Hassan, has caught the eye by scoring a perfect 100 in Sanskrit of all subjects in his 10th CBSE board examinations.

Given an option to choose any language from a many, Zaid opted for Sanskrit, following in the footsteps of his elder brother, Muhammad Yusuf Hassan, who likewise had done well in the language during his school years.

Yusuf is presently doing his B-Tech from IIT Gandhinagar, Gujarat. The parents of these two young boys are both doctors, Dr KM Hassan and Dr Nazia Hassan.

His father Dr Hassan opined, as per ThePrint, that languages such as Sanskrit and Urdu are losing their lustre and efforts must be made to keep them alive.

Zaid has been studying Sanskrit since Class IV and claims his interest in the subject is in no small measure to his Sanskrit teacher, Sudhakar Mishra.

Zaid might have been moved by practical reasons since Sanskrit could yield the maximum numbers, which it did in his case—overall he ended up with 487 marks out of 500—the underlying message of his effort deserves praise and publicity.

At a time when Hindus and Muslims are spoken as different entity in India, such cross-culture readiness is worthy of respect and emulation.

An instance, which comes readily to mind, is one of famous actress Meena Kumari who insisted her step children be taught Quran by a Brahmin living in an upper flat. The Brahmin was rated the best teacher of Quran in neighbourhood. When Meena Kumar offered fees to the Brahmin teacher, he replied “Quran sikhane ki keemat nahin lee jaati (nobody seeks payment for teaching Quran).”

Recently, an unfortunate incident had unfolded in the Banaras Hindu University (BHU), Varanasi where a Muslim sanskrit teacher Firoz Khan’s appointment was stalled by a section of the students, leading to his transfer in another department. Though protesting students claimed they didn’t object to his Sanskrit-teaching but to the religious grounding which was necessary and in accordance to the rules of the university for those teaching “Dharma Vigyan”, it was a great story of inspiration to the society which was lost.

Zaid meanwhile has plans to take science in his intermediate studies and wants to pursue engineering later.