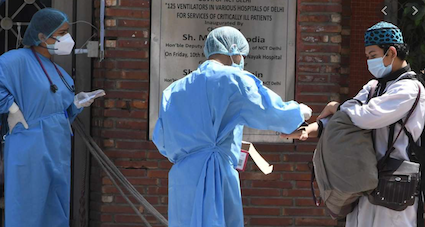 As India picks up the pace of its immunization campaign, to vaccinate as many people as possible, reports are suggesting that the covid-19 immunization among minorities is poor, especially Muslims.

According to a report, experts and health workers in Bengaluru have informed that Muslims are not willing to take the jab, and immunization amongst them is lower in several parts of the state. A BBMP official stated that while the authorities are trying to create awareness and educate people to get vaccinated, people do not come to get the shot.

Dr. Giridhara R Babu, a public health expert and an epidemiologist took to Twitter and pointed out, “Earlier vaccination programs had clearly defined social mobilization components. They used to engage with all religious leaders for the awareness programs. Not engaging with the minorities in a culturally sensitive and appropriate manner will worsen the health inequities.”

However, Maulanas and other religious leaders from the minority section were quick to accuse the government of not making enough efforts to urge people to get vaccinated.

“The state government, which sent out so many circulars asking us not to gather crowd during festivals, can also send out a circular instructing us to tell people to go and take the vaccine,” said Maulana Maqsood Imran Rashadi, Khateeb O Imam, Jama Masjid.

However, the government has time and again issued clarifications that the vaccines are safe.

Similar reports came from Ahmedabad where despite organizing awareness campaigns for covid-19 vaccination, the Ahmedabad Municipal Corporation (AMC) informed that only fewer people from the Muslim-dominated turned up for vaccination shots.

Experts said that the misinformation, fake and dubious videos related to ‘side-effects’ have sparked fears in Muslim communities.

The AMC informed that to create awareness among people, they had even approached Muslim legislators to take the vaccines but neither of the two Congress MLAs from the community — Jamalpur MLA Imran Khedawala and Dariyapur MLA Gyasuddin Shaikh has taken the vaccination yet. The civic body also tried to create awareness through Friday namaz.

The situation is no different in Surat and Godhra.

Even 50 mosques in Godhra in Panchmahals district were roped to convince the people to register for vaccination. Dr. Zuber Mamji, a member of the trust that runs the covid-19 center in Godhra, also informed how they tied up with different clerics and doctors from the community, who are locally trusted by the people in times of their illness, to convey the message.

The Muslim communities have been the butt of attention during the Coronavirus pandemic. beginning. Tablighi Jamaat after its Delhi gathering was identified as a major virus hotspot last year.