My, my my: MP CM Shivraj Singh Chouhan sings and how! 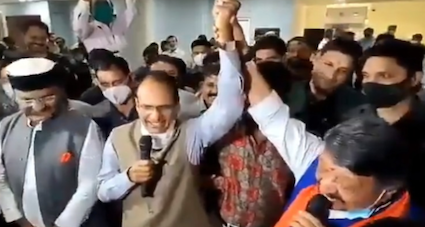 In the clip from the event, the politicians were seen holding microphones as the music plays in the background. While Chouhan takes the lead in singing the song, Vijayvargiya soon joins in, extending his hand in an attempt to show friendship and unity. The crowd including those from the Opposition were seen cheering the duo when the two hold hands and sing together.

CM Shivraj took to Twitter and shared the clip, tagging actor Amitabh Bachchan and Dharmendra Deol in his post. The original song, sung by Kishore Kumar and Manna Dey, was featured on these two actors.

Vijayvargiya and Chouhan have been friends since they started out in politics. While sharing the video, Vijayvargiya recalled the times when he and Chouhan would sing the song together as members of the Yuva Morcha, and how the duet helped rekindle memories relating to that time.

Meanwhile, the ‘bhutta party’ was attended by MLAs from both the ruling BJP and opposition Congress. Former Chief Minister Kamal Nath was also present at the party.