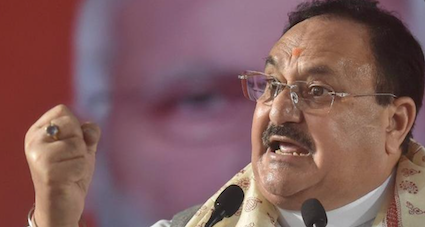 “Your party, under your leadership, is doing no favours to itself by opposing lockdowns and then demanding for the same (sic), ignoring the Centre’s advisories on the second wave of Covid and then saying they did not get any information, holding massive election rallies in Kerala causing a spike in Covid cases while grandstanding about election rallies elsewhere, supporting protests but speaking about following Covid guidelines,” Mr Nadda wrote.”Even when the second wave was on the rise, your party leaders were happier being seen in super spreader political events in north India, where there was no regard for masks or social distancing. This is not an era when such information can be erased from public memory.”

At a Congress Working Committee meeting, Sonia Gandhi had said on Monday: “The country is paying a horrendous price for the Modi government’s neglect of the pandemic…”

Nadda also took a potshot at Rahul Gandhi, saying the conduct of topmost Congress leaders including him would be remembered for “duplicity and pettiness”.

“One would wish that while India is fighting COVID-19 with utmost courage, the top echelons of Congress would stop misleading people, creating false panic and even contradicting their stands based on political considerations,” Mr Nadda wrote, saying he was writing with a “deep sense of pain”.

He accused the Congress of mocking the “made-in-India” Covaxin and creating doubts in the minds of people. “In a nation that has almost no recent history of vaccine hesitancy, your party has the dubious record of trying to actively create it, that too in the middle of a once-in-a-century pandemic,” the BJP president said.

Taking on Sonia Gandhi’s criticism of the government “abdicating its responsibility on vaccination”, Mr Nadda said, in April, “topmost Congress leaders” were calling for decentralization of vaccination.

“The COVID-19 vaccine made in India does not belong to any political party or leader – it belongs to the nation. Yet the Congress party could not do the right thing, instead only did the wrong politics.”