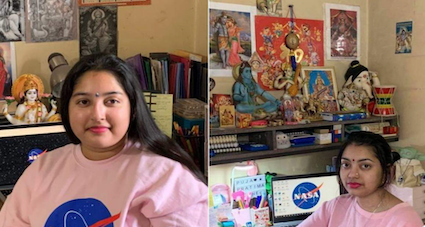 The National Aeronautics and Space Administration (NASA) in the United States shared the photo of four interns who had received an opportunity to pursue an internship and the space research agency.

However, it created flutter in pseudo-liberals of India who were offended by the Indian NASA intern Pratima Roy, who had posted a pic of her with Idols of Goddess Lakshmi, Saraswati and more.

As soon as the photo got viral, Hinduphobic liberals started questioning NASA for posting a picture of the girl with Hindu Gods. Some of the self-professed ‘intellectuals’ were not happy with Roy’s devotion towards her Gods.

Ashok Swain, whose tweets found acceptance in Pakistani media and were quite popular among the Indian liberal cabal, was the one who had the most problem with the Hindu faith of the NASA intern. Quoting a tweet by NASA, he questioned, “Why do Hindus need to surround themselves with Gods and Goddesses.”

Swain, several times, was seen spreading fake news, undermining national interest, and of course, Hindu bashing. While on the one hand they present themselves as secular, on the flip side, they continue to question people who follow their faith.

There are numerous other comments with regards to Roy that make the pulpable Hinduphobia abundantly evident. (read here).

While these people are questioning Hindu believe should know that both Science and Religion do not share an antagonistic relationship in Hindu faith rather they are considered as inseparable.

Srinivasan Ramanuja, for instance, one of the greatest mathematicians to have ever lived credit his knowledge to visions from his Goddess. He is known to have famously said, “An equation for me has no meaning, unless it represents a thought of God.” He credited his achievements to Mahalakshmi of Namakkal, a family Goddess.