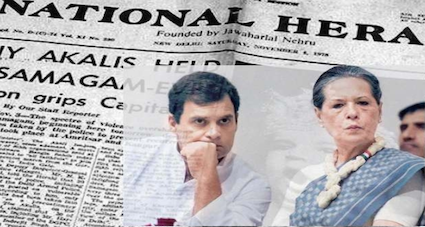 In a key development, sources told Republic TV on Tuesday that ED officials recovered a few incriminating documents during the raids in connection with the National Herald case.

The central agency carried out raids in the national capital at the Herald House, the head office of the National Herald newspaper and 11 other locations as part of a money laundering investigation.

It aimed to gather additional evidence with regard to the trail of funds and they are against those entities who were involved in the National Herald-linked transactions.

As per sources, the statements of some National Herald employees were also recorded. Moreover, digital devices were also seized. Moreover, the location of a Kolkata-based shell company involved in the case was also recovered amid the raids.

In 2013, BJP Rajya Sabha MP Subramanian Swamy filed a private criminal complaint wherein he accused Sonia Gandhi, Rahul Gandhi and others of conspiring to cheat and misappropriate funds. He specifically highlighted that Young Indian Pvt. Limited paid only Rs.50 lakh to obtain the right to recover Rs.90.25 crore that Associated Journals Limited (AJL) owed to Congress. On December 19, 2015, the Gandhi mother-son duo got bail on furnishing a personal bond of Rs.50,000 each and a surety after the court ruled out apprehension that they will flee the country.

The ED registered a case under PMLA after a trial court in Delhi took cognizance of the Income Tax probe against Young Indian Pvt. Limited. In 2015, the investigation wing of the I-T department submitted a detailed Tax Evasion Petition against some persons including Rahul Gandhi. While the Congress president was originally summoned by the ED on June 8, her appearance date was pushed forward to June 21 after she tested positive for COVID-19. After being questioned for nearly 6 hours on July 26, she was asked to appear before the ED the next day as well. Rahul Gandhi too was quizzed for over 54 hours spread over 5 days.