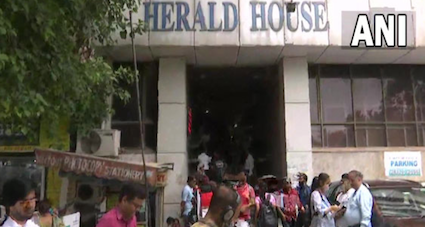 In what could spell more trouble for Congress leaders Sonia Gandhi and Rahul Gandhi, the Enforcement Directorate on Tuesday launched mega searches at Herald house in Delhi in connection with the National Herald case.

The Central agency also carried out multiple raids in at least 10 locations in the national capital.

This comes a few days after Sonia and Rahul Gandhi were grilled by the ED in the money laundering case linked with National Herald.

Kolkata based Dotex Company is also under ED’s scanner as it is suspected to be the shell company in AJL scam.

The money was used to take over commercial assets of AJL.

There are multiple other shell companies which are currently under ED lens. The ED is also carrying out multiple raids across at 10 locations across major cities like- Mumbai, Delhi and Kolkata.

Earlier on July 27, Congress chief Sonia Gandhi was summoned for the third time by the ED and before that Rahul Gandhi was also questioned for five rounds regarding the same. Sonia and Rahul Gandhi were asked routine questions about the National Herald case including the alleged transfer of Rs 90 crore from Associated Journals Ltd to Young India. The Congress president was also asked how Young India acquired power from AJL and gave loans to pay employee salaries, share-holding of AJL, evidence to prove a loan of Rs 90 crore was given to AJL, etc.

Congress workers reached the Herald House as raids by Enforcement Directorate (ED) continued at 12 locations across in Delhi in the National Herald case on Tuesday. The workers, hundreds in number, gathered outside the Bahadur Shah Zafar Marg-based building raising slogans of ‘ED haye, haye!’ with placards in hand that read ‘National Herald case to bas ek banana hai, Modi sarkar ki vifaltaaon ko chupana hai (National Herald case is just an excuse, the real motive is to hide the failures of the Modi government)’.

The case pertains to the probe into the alleged financial irregularities in the party-promoted Young Indian that owns the National Herald newspaper. The paper is published by AJL and owned by Young Indian Pvt Limited.

The probe agency had registered a fresh case under the criminal provisions of the PMLA after a trial court took cognizance of an Income Tax Department probe against Young Indian Pvt Ltd on the basis of a private criminal complaint filed by BJP MP Subramanian Swamy in 2013.

Swamy had accused Sonia Gandhi, Rahul Gandhi, and others of conspiring to cheat and misappropriate funds, with Young Indian Pvt Ltd paying only Rs 50 lakh to obtain the right to recover Rs 90.25 crore that Associate Journals Ltd owed to the Congress. On December 19, 2015, the Gandhi mother-son duo got bail on furnishing a personal bond of Rs.50,000 each and a surety after the court ruled out apprehension that they will flee the country.