Nawab Malik has links with the underworld, claims Fadnavis 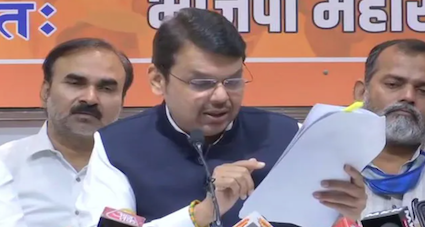 Bharatiya Janata Party (BJP) leader Devendra Fadnavis has claimed that Nawab Malik, the NCP leader and a minister in the Maha Aghadi government in Maharashtra, has links with underworld.

In a sensational press conference this afternoon, Fadnavis claimed Malik “purchased land from convicts of the case (in the 1993 Mumbai bomb blast case) on rates cheaper than the market rates. Was this deal to save prime land from being forfeited under the TADA law?…the NCP leader has links to the underworld.”

Malik is in the thick of action in the Aryan Khan drug case in which he has alleged that the investigating NCB zonal director Sameer Wankhede arrested the son of superstar Shah Rukh Khan with an eye to extort money, among other allegations.

Interestingly, though Malik made allegations against Wankhede, the Uddhav Thackeray government, in an indirect snub, has not filed any FIR on the matter thus far.

Fadnavis’ frontal attack joins the one of Wankhede’s sister-in-law Harshada Redkar who has vowed to take legal action against Malik after the latter had wondered if she too was in the drug business.

“How can Nawab Malik reveal a victim’s name in the public domain? Damaging the modesty of a woman is a crime so we will take legal action against Mr Malik, as already Sameer Wankhede’s father has taken a legal step against Nawab Malik,” Kranti Redkar, the wife of Sameer Wankhede, told Times Now.

The father of Sameer Wankhede, Dnyandev, has already lodged a police complaint in Mumbai against Malik for allegedly making “false and derogatory” remarks about him and his family members.

Malik, earlier this month, had also dragged Fadnavis into controversy, claiming he “appeared to be the mastermind” of the illegal drugs trade in Maharashtra. He had released a photo of Fadnavais with his wife Amruta and an alleged drug dealer Jaydeep Rana.