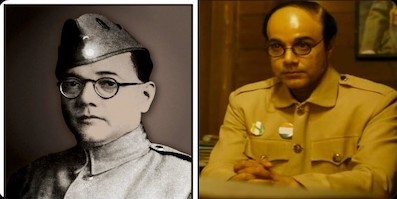 How ludicrous could it get? A genuine portrait of Netaji Subhash Chandra Bose, unveiled at the Rashstrapati Bhavan by president Ram Nath Kovind on January 23, now to be known as “Parakram Divas,” has fallen prey to the propaganda mounted by forces inimical to BJP who claimed that it was a portrait of an actor playing the role of legendary figure than the latter himself.

Social Media was taken over by the propagandists claiming that it was portrait of actor Prosenjit Chatterjee—in his portrayal of Netaji in a movie “Gumnaami”—which had been inaugurated by the President of India than the great man himself.

Barkha Dutt was quick to run away with the insinuation with a tweet of her own which said: “I wish this were a headline from the Onion. I had to look twice to make sure it had actually happened. How utterly embarrassing”.

Next was Sidharth Bhatia, the founder-editor of Leftist portal The Wire who wondered if it would be the portrait of Ben Kingsley instead of Gandhi. Next was Rohini Singh, a journalists from the same stable.

Sagarika Ghose was typically shrill. She asked the President of India to replace the portrait. “Can’t have a fake Netaji up on the hallowed walls of RashstrapatiBhavan.” Another journo, Swati Chaturvedi, chimed in the same rhyme.

It was only logical  all these journalists who wear the anti-BJP stance as a badge of honour would quickly find an echo in Trinamool Congress (TMC) chambers. Its MP Mahua Moitra prayed “God Saves India (because this government certainly can’t)” in a tweet.

Well, a few of such muck-rakers had to delete their tweet after it came to light that this very image was shared by the grand-nephew of Netaji, Chandra Kumar Bose himself in January 2020. That the portrait is of Netaji himself is attested by the fact that it is signed by a Bengali painter and Padma Shri Awardee Paresh Maity. His signature could be seen at the bottom of the portrait. (see image below).