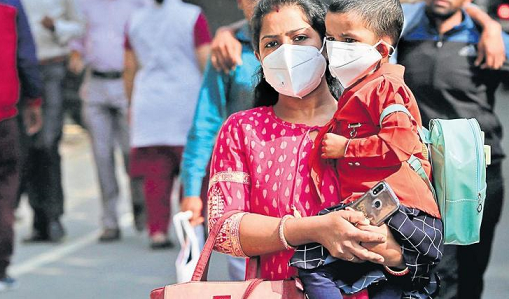 A new study on raging Coronavirus pandemic in India has made the startling discovery that children are no less carriers of the virus than seniors.

The focus of study was two southern Indian states of Andhra Pradesh and Tamil Nadu, together having a population of 128 million and representing two of the five Indian states with the most cases. They also have among the most sophisticated healthcare systems in the country.

Journal Science did an ambitious study of 85,000 corona patients and nearly 600,000 of their contacts. The contact-tracers reached more than three million contacts of the 435,539 cases in these two states. The study was remarkable since contact-tracing has proved elusive even to do in the United States. To do so in India, with his crowded humanity, is extraordinary.

India now has more than six million cases, second only to the United States and the virus is rampant without letting up after several lockdowns and last seven months of agony, pain and death.

Some 5,300 school-aged children in the Study had infected 2,508 contacts with the virus which is only a sample since the contact-tracers couldn’t have reached to all of those who got in touch with them. For example, nobody knows how many adults they infected. But the finding is important since so far it was believed that children spread the virus to a negligible degree, if at all.

Further, those above the age of 65 in India were less likely to die out of Coronavirus than those below it which could be attributed to the fact that those who lived long enough were likely to be from a secure background and thus financially secure. Medical help was viable for them. However, the median age of death after hospitalization in India was only five days compared to two weeks in the United States. Again, it could be due to the vastly different medical infrastructure in the two countries.

The overall case-fatality rate is 2 percent due to the pandemic. And worldwide the rate rose sharply with age. But in India it tends to dip after 65 years of age. India has a life expectancy of 69 years which is 10 years lower than in the United States.

The data revealed that the people infected first—known as index cases—were more likely to be male and older than their contacts. It could because men are more likely to be in situations where they could be infected. Interestingly, 71 percent of the people didn’t transmit the virus at all; indeed, just 5 percent of people accounted for 80 percent of the infections, detected by contact tracing. It nullifies the idea of “super spreader” in which a single person is believed to infect hundreds of people in a crowded gathering.

India first recorded its Covid-19 case on January 30 to an Indian citizen evacuated from China. The government began screening travellers from China and other countries on February 7. They extended the measure to all travellers on March 15. The country shut down on March 25 but reopened two months later. Now there are sporadic lockdowns around the country.

This study is important since so far the effort has been directed at developed countries such as United States, United Kingdom and Spain, France, Italy etc. Experts say its one of the most important data to have come from low to middle income countries. Still it must not be forgotten that these studies are in states which are relatively wealthy. The situation in Uttar Pradesh or Bihar, for example, could be worse.

One saving grace though in all this is that the fatality in India is yet to reach 100,000.