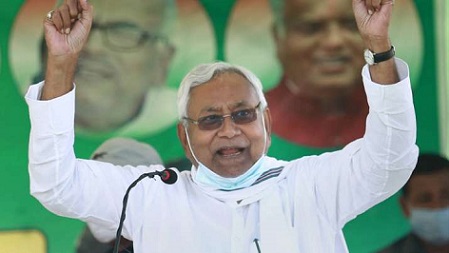 Janata Dal (United) has announced that it was planning to contest at least 75 of 294 legislative assembly seats in West Bengal. The party led by Bihar Chief Minister Nitish Kumar said on Thursday that the seats it plans to contest are those in which Biharis live in large numbers. The announcement was made by Ghulam Rasool Baliyavi, West Bengal unit chief of the JD(U), who said that his party has been working in many areas.

The BJP and JD(U) are allies in Bihar but in some other states they have contested against one another. In the assembly polls scheduled for April-May 2021, less than six months away, the BJP expects to put up a good fight and replace the ruling Trinamool Congress led by Mamata Banerjee. The JD(U) has indicated that it would like seat sharing with the BJP in West Bengal.

Baliyavi said that the good governance given by Nitish in Bihar has created a buzz in neighbouring West Bengal also. The JD(U) has worked hard and expanded its support base in Malda, Murshidabad, Purulia and Bankura substantially. The party has contested assembly elections in the state in the past also, he pointed out.

He also said that it would be good if the BJP took Nitish Kumar along. Otherwise, each party has a “right to expand its base” and the JD(U) will go it alone in West Bengal. Incidentally, in Karnataka as also Gujarat, the JD(U) had contested against the BJP candidates. However, in Delhi, the assembly elections were fought by the two parties together on seat sharing basis.