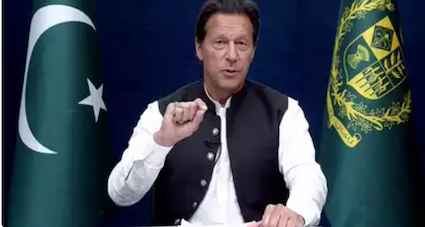 In a dramatic development, the no-confidence motion against Prime Minister Imran Khan was dismissed by deputy speaker Qasim Khan Suri, terming it “unconstitutional”.

Moments after the dissolution of the no-trust vote, Imran Khan, in a televised address, congratulated the people and called for fresh elections in Pakistan. The enraged Opposition has decided to move court against the government.

Imran sought the dissolution of the National Assembly and called for re-elections to be held in the country. He said he has sent recommendation to President of Pakistan to dissolve the Assembly and announce fresh elections.

Citing reasons for waiving off Opposition’s demands to oust Khan, the Deputy Speaker declared the no-trust motion against the Constitution of Pakistan and is corrupted with elements of foreign entities.

Addressing the Assembly during the so-called Question and Answer round, the newly inducted Law Minister Fawad Hussain iterated the foreign conspiracy theory as devised by Khan during PTI’s mega rally.

“Unfortunately, this is an effective operation for regime change by a foreign government. People of Pakistan should first be told whether the no-confidence motion against the Prime Minister is justified and under any undue coercion from abroad,” the Minister said.

Advocating his stand, Hussain also said that it is the basic duty of Pakistani, as provided under Article 5(1) of the Constitution, to be loyal to the State.

“Article 5(1) 5. (1) Loyalty to the State is the basic duty of every citizen. This is effective operation of region change with the instigation of a foreign government,” he outlined.

Amid sounds of displeasure, the Minister continued to advocate for the PTI-led regime, he said, “We want to know if Pakistan’s government can be changed. Are we beggars as said by the Opposition leader? This drama cannot go on,” he said.