No-holds barred Imran: “You know where power is” in Pakistan 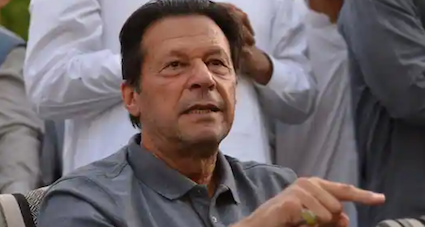 In an unusual attack on Pakistan’s military, ousted Prime Minister Imran Khan has admitted that his government was a “weak one” which was “blackmailed from everywhere” as the power was not with him and “everyone knows where that is”.

Imran Khan was ousted from power in April after losing a no-confidence vote in his leadership, which he alleged was part of a US-led conspiracy targeting him because of his independent foreign policy decisions on Russia, China and Afghanistan.

In an interview to Pakistan’s Bol News on Wednesday, Imran Khan was asked to recall the events of the night of the no-confidence vote against him, who was issuing orders and who had impeded the cases against the Pakistan Peoples Party (PPP) and Pakistan Muslim League-Nawaz (PML-N) leaders, Pakistan’s Dawn newspaper reported.

The Pakistan Tehreek-e-Insaf chief said his government had been “weak” when it came to power and had to seek coalition partners, adding that if the same situation were to arise again, he would opt for re-elections and seek a majority government or none at all.

“Our hands were tied. We were blackmailed from everywhere. Power wasn’t with us. Everyone knows where the power lies in Pakistan so we had to rely on them,” the 69-year-old cricketer-turned-politician said, without elaborating any further who he was referring to.

Imran Khan, who came to power in 2018, reportedly with the backing of the military, is the only Pakistani Prime Minister to be ousted in a no-confidence vote in Parliament. He was replaced by PML-N’s Shehbaz Sharif.

He said it was imperative for the country to have a “strong army” due to the threat posed by the enemies but said there was also the need to strike a “balance” between having a strong army and a strong government.

“We relied on them all the time. They did a lot of good things too but they didn’t do many things that should’ve been done. They have the power because they control institutions such as NAB (National Accountability Bureau), which wasn’t in our control,” he said.

The former Prime Minister said while his government had the responsibility, it did not have all the power and the authority.

The Pakistan Army, which has ruled the coup-prone country for more than half of its 73 plus years of existence, has hitherto wielded considerable power in the matters of security and foreign policy. However, the army has continuously denied its involvement in politics.

According to experts, Imran Khan, who was ousted on April 10 after the National Assembly passed a no-confidence motion against him, had apparently lost support of the Army after he refused to endorse the appointment of Lt Gen Nadeem Anjum as the ISI spy agency chief last year. Finally, he agreed but it soured his ties with the Army.