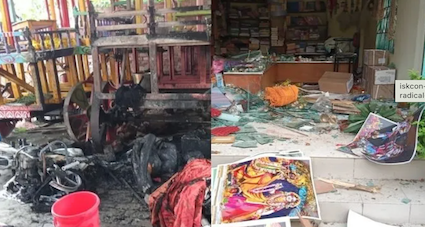 A mob of Muslims ransacked the ISKCON temple and attacked devotees in the Noakhali district of Bangladesh.

The temple community said, ISKCON member, Partha Das was brutally killed by a mob of over 200 people yesterday. His body was found in a pond next to the temple, the community added.

The community further tweeted, “ISKCON temple & devotees were violently attacked today by a mob in Noakhali, Bangladesh. Temple suffered significant damage & the condition of a devotee remains critical. We call on the Govt of Bangladesh to ensure the safety of all Hindus & bring the perpetrators to justice.”

Sharing the video of the incident ISKCON spokesperson Radharamn Das informed that a makeshift Durga pandal, located in front of the temple, was also vandalized.

Das had also shared visuals of a Hindu monk, who was critically injured after sustaining a dagger attack to his head. He remarked, “Please pray for these two devotees who lost their life today at our ISKCON temple in Bangladesh: (1) Nitai Das Prabhu and (2) Jatan Saha Prabhu. They fought bravely with Muslims while trying to protect the Deities but were outnumbered. Another Hindu was killed in Police firing.”

Arindam Bagchi, the spokesperson for the Ministry of External Affairs said, “We have seen some disturbing reports of untoward incidents involving attacks on religious gatherings in Bangladesh. We note that the government of Bangladesh has reacted promptly to ensure control of the situation, including the deployment of law enforcement machinery.”

Earlier this week, communal violence broke out in several places in Bangladesh after a rumor claiming ‘insult to Quran’ at a Durga Puja pandal went viral. Hours after this, mobs of radical Islamists attacked the Cumilla Durga Puja pandal, damaged the idol, and unleashed violence in the area.