Notre Dame Cathedral to be rebuilt in mirror-image 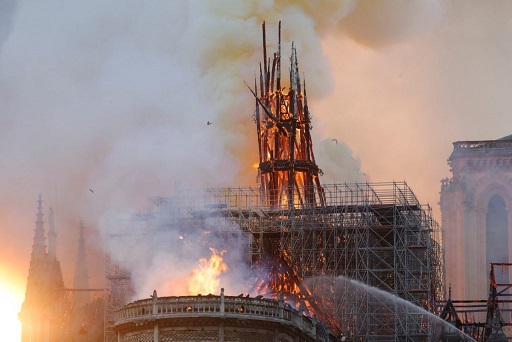 Notre Dame Cathedral will be restored in the mirror-image of as it was before the 2019 fire, it was announced by the French government last evening.

“The President of the Republic became convinced of the need to restore Notre-Dame de Paris as closely as possible to its last complete state…read a statement from the Élysée Palace, the official seat of the French presidency.

While undergoing renovation and restoration, the roof of Notre-Dame caught fire on April 15, 2019. It burnt for 15 hours and caused serious damage to the cathedral.

Architects were invited to submit proposals for how to restore Notre Dame, a site that occupies many hues in the history of the French capital.

Notre-Dame de Paris, simply Notre-Dame (Our Lady of Paris) is a medieval Catholic cathedral, one of the finest examples of French Gothic architecture. Nearly 12 million people visit it annual, this of course before the Corona Virus cast its dark shadow early this year. The French Parliament passed law on July 16, 2019, requiring it to be rebuilt as before the fire. The French government hopes the reconstructed could be completed before 2024 Summer Olympics in Paris.

President Emmanuel Macron didn’t want to delay the construction site nor to complicate the issue with a contemporary vision. The surroundings though could go for a complete makeover.

The restoration project drew immediate philanthropic responses within days of last year’s fire Over a billion dollars were pledged by French business tycoons such as Bernard Arnault and Francois Pinault.