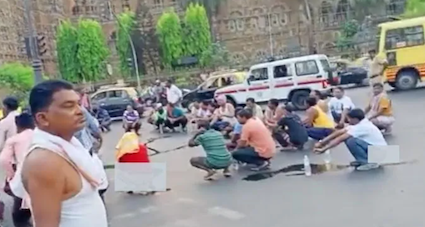 Don’t listen to our grievances? Sure you would if you take a leaf out of the copybook of employees of Maharashtra State Road Transport Corporation (MSRTC) employees.

It has been since October when the employees have been on strike with the demand to absorb the MSRTC into the aegis of the state government.

A few employees have been demanding the Uddhav Thackeray government to provide them with basic amenities such as toilets and drinking water, sitting on dharna on Azad Maidan.

Looking at their plight, the fellow employees, angered by the apathy of the authorities to the demand, decided to defecate in the open outside the BMC building. The video has taken the social media by storm.

Since Azad Maidan had no toilets and availability of potable water, the ST workers had asked the government to make them available for them amidst the ongoing protests. However, the Maha Aghadi government chose to warn the protestors to resume their jobs or risk being permanently removed.

As of March 10, out of 82,498 MSRTC employees, 54,396 were still participating in the strike while others had resumed their duties.