Now a forced conversion to Islam: A female journo’s charge against a channel owner 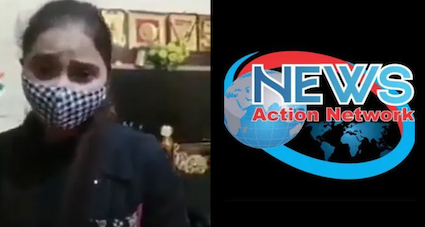 Amid Lavanya’s forced conversion case of Tamil Nadu, another girl from Delhi has allegedly claimed that her employer has pressurised her to adopt Islam.

In a viral video, a female, who is journalist by profession, has accused Shan Chaudhary, Managing director of YouTube-based news channel, News Action Network for forcing her to convert to Islam. She further claimed that Shan has lured her to even increase her salary from 25,000 to one lakh post conversion.

“He used to say, ‘you look like a Muslim girl. If you convert to Islam, I will increase your salary from Rs 25,000 to Rs one lakh,’ the woman could be heard saying.

Providing details about the incident in Facebook live, the woman alleged that Shan in presence of three other women abused her and even threatened to kill her. She even filed an FIR in Preet Vihar’s police station but ASI Sohangir has  refused to file her FIR. She added that her FIR was registered after social activists Rajesh Bhasin and Aastha raised the issue on social media.

However, even after two months, no action has been taken by police as Chaudhary has political links

She said, “It has been two months, and three IOs have been changed, but the Police have not taken any action, either take any action or tell me my case is a fake one. Close the case if you do not want to take any action.”