Now BSF has jurisdiction inside 50kms of Punjab, Bengal and Assam: Channi cries foul; So does Mamata’s TMC! 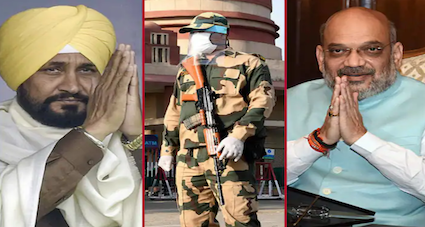 A political storm has broken out. A new notification by the Ministry of Home Affairs (MHA) has empowered Border Security Force (BSF) to search, seize or arrest inside 50km of three states—Punjab, Bengal and Assam—overriding any other law enforcement agencies of those states.

It has upset the ruling Congress party in Punjab a great deal with its new chief minister Charanjit Singh Channi issuing a harsh tweet, terming it an “irrational decision” and an “attack on federalism”. Mamata Banerjee hasn’t yet squeaked in protest which she most likely do but Himanta Biswa Sarma in Assam would’ve no issue with the new guidelines.

The new MHA notification on BSF covers other states too but in view of concern on illegal drugs and arms supply in Punjab, and a whole lot of dimensions, it would dominate headlines in coming days.

The New Notification In Essence

First, the new notification for readers. As said, BSF could search, seize and arrest 50km inside three states bordering Pakistan and Bangladesh—Punjab, Bengal and Assam. Earlier this range was 15km for these states.

BSF, in addition, would also be able to search, seize and arrest in Nagaland, Mizoram, Tripura, Manipur and Ladakh.

In Gujrat, this limit has been reduced from 80km to 50km to bring about a uniformity. In Rajasthan, the radius area under BSF control has been retained to 50km as is the practice.

No boundaries have been set for the five northeastern states of Meghalaya, Nagaland, Mizoram, Tripura and Manipur. There is also no boundary set in Jammu and Kashmir and Ladakh.

The Border Security Force Act, 1968 (Section 139) empowers the Centre to notify, modify the extent of operation of this security agency as it deems fit. The present notification would help BSF to enforce Passport Acts (for infiltrators), Customs Act (smuggling) and NDPS (Narcotics Drugs and Psychotropic Substances) Act strictly.

A BSF officer of the rank corresponding to that of the lowest ranking member of the agency, under the CrPC, could now exercise and discharge the powers and duties without an order from a Magistrate, and without a warrant.

He could arrest any person who has been concerned in any cognizable offence or against whom a credible information has been received. He could conduct any search in the area under its jurisdiction.

Punjab Has Long Been In News For Wrong Reasons

This move by the MHA hasn’t come too early for there has always been concern about drugs and arms and infiltrators making use of long borders India shares with Pakistan and Bangladesh. BSF has had the power to search and seize suspects but whatever arrests they made, they had to hand them over to state police. More often than not, those suspects were operating again soon enough much to BSF’s frustration.

Now this present move would put the BSF in crosshair of Punjab state police as they stand eclipsed in the new area designated to be under BSF’s jurisdiction.

The thing is former Punjab chief minister Capt. Amarinder Singh and his successor now, Charanjit Singh Channi himself have raised the issue of drugs and illegal arms being supplied inside their state with home minister Amit Shah in recent times.

In June this year, Amarinder had digitally launched the “live destruction” of seized drugs in Amritsar, including 659kg of heroin, valued at Rs 1,318 crore in the international market. Also destroyed were 3,000km of poppy husk, pills/capsules worth Rs 5.8 crores, 166kg of ganja and 5kg of charas.

But now Channi is crying foul as are his Congress mates in Punjab. Tweeted Channi in the wake of new notification:

“I strongly condemn the government’s unilateral decision to give additional powers to BSF within 50 km belt running along the international borders, which is a direct attack on the federalism. I urge the Union Home Minister Amit Shah to immediately roll back this irrational decision.”

The outcry from Punjab Congress is terming it an attack on religious feeling of Sikhs since Amritsar, and by default holy Golden Temple, is only 35km from the Wagah border with Pakistan. It means most of Amritsar comes under the purview of BSF which shrinks the power of state police. The same control BSF would now be able to exert on Tarn Taran and Pathankot.

Punjab’s deputy chief minister Sukhjinder Randhawa, who is also the home minister, has said this present move would create an atmosphere of fear in Punjab. “People will not tolerate this,” said Randhawa.

An uncalled for threat was also visible in Randhawa’s words “Punjab has never seen communal violence,”. As if it could now!

Former Punjab chief minister Capt Amarinder Singh, out of his chair but still a Congressman, agreed with the new notification. “Our soldiers are being killed in Kashmir. We’re seeing more and more weapons and drugs being pushed by Pakistan-backed terrorists into Punjab. BSF’s enhanced presence and powers will only make us stronger. Let’s not drag central armed forces into politics,” the captain tweeted.

Centre’s move comes at a time when infighting within the Congress camp is glaringly visible. Navjot Singh Sidhu has got Amarinder replaced but the new man Channi has made key appointments which are not to his liking. Sidhu’s present position is “resigned” as chief of Punjab state Congress. He hasn’t taken it back though expresses his loyalty to Gandhis virtually every hour.

Punjab is due for assembly polls in a few months time and the present move by Centre would snowball into something else, if one also factors in the loose threads of Khalistanis, ISI and protesting farmers.