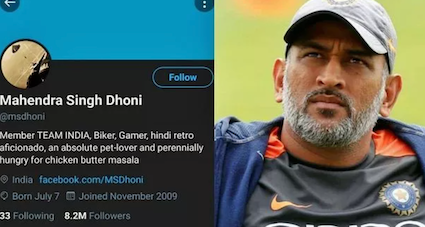 Microblogging site Twitter removed the ‘blue tick’ from the social media handle of former Indian cricket team captain Mahendra Singh Dhoni. The verification badge was, however, restored within a couple of hours.

Although Twitter has given no clarification on the removal of the blue tick, the social media giant is facing the wrath of netizens.

It is not the first time, Twitter had previously also removed the verified badges of Vice President Venkaiah Naidu and RSS chief Mohan Bhagwat in June.

Dhoni will next be seen in IPL 2021 which will resume on September 19 with Mumbai Indians playing against Chennai Super Kings. The final match will be played between Royal Challengers Bangalore and Delhi Capitals on October 8.