Now you see now you don’t: Mr Kejriwal I hope you see this road disappear in South Delhi 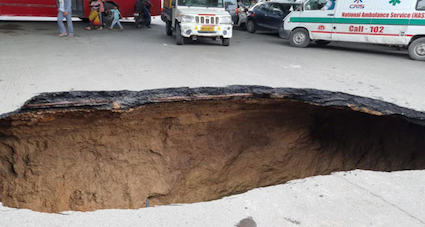 A section of the road near the Indian Institute of Technology in south Delhi caved in, causing traffic disruptions on Saturday afternoon. While no injuries is reported in the incident so far, Delhi Traffic Police shut vehicle movement on that stretch of the road and diverted the traffic near IIT-Delhi.

“Due to the road collapse near the IIT traffic light, vehicles going from IIT to Adhchini were diverted to Katwaria Sarai. Please avoid using this road,” Delhi Traffic Police tweeted.

A few days ago also, heavy rains caused a street to cave in the Dwarka region. A car got stuck in the hole and had to be pulled out using a crane. The Delhi Police said that no injuries were reported in the incident.

Apart from this other areas where waterlogging was reported were Ring Road, Pragati Maidan, Palam, Kirari and Rohtak road.

Delhi has been witnessing light to moderate rainfall since Sunday, following which waterlogging, traffic jams and instances of wall collapse have been reported at several places in the national capital.