Nupur Sharma granted relief by the same bench of SC 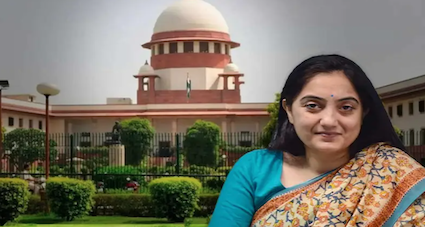 Nupur Sharma, involved in Prophet remark row, has been granted interim relief from arrest by the Supreme Court today on multiple FIRs registered against here.

Justices Surya Kant and JB Pardiwala, the same bench which had made scathing remarks on Nupur Sharma on her plea for combining FIRs against her on July 1, today in view of latest developments had a sympathetic view on her situation.

Pleading her case, Nupur’s advocate Maninder Singh claimed there was an increased threat to her life. A Pakistani national was held by the BSF who had crossed over the border to kill Sharma. Then there were people in Patna who have been apprehended who had Sharma’s mobile number and address and allegedly wanted to kill her.

When the court asked if the instances had happened after Singh filed his miscellaneous plea, he mentioned that the threats were continuous. He argued amid such threats; it would be impossible for Sharma to travel to other states. The court said, “We never wanted you to go everywhere. maybe we could not convey this, or you did not.”

The matter is listed for August 10 for next hearing.

The bench comprising Justice Surya Kant and Justice JB Pardiwala heard the petition filed by Nupur via Senior Advocate Maninder Singh. In the plea, Singh stated that there was a threat to Sharma’s life. He also mentioned the recent report where a Pakistani national was held by BSF who travelled from the neighbouring country to kill Sharma. He also mentioned how people were apprehended in Patna, who had Sharma’s number and address on her mobile and allegedly wanted to kill her.

Justice Kant then asked if Sharma was willing to appear in Delhi High Court, to which Singh agreed. After hearing Singh’s arguments, Justice Kant observed, “Our main concern is that you should not be deprived of your right of alternate remedy and develop modalities.”

In its orders, the apex court said, “In support, the petitioner in the Miscellaneous application has stated that after July 1 order of this court, various incidents like threats like one by Salman Chishti claiming to be Khadim of Ajmer Dargah has called upon people against the petitioner.”

The court further added, “Another from UP has made a viral video threatening to behead her. Another FIR has been registered against her in West Bengal, and Kolkata police have issued a lookout circular which will lead to immediate arrest and consequential denial of relief by not approaching HC.” The court permitted to file an additional affidavit giving specific details of these instances.

The court further said that it would look at how Nupur Sharma would avail alternate remedies and issued notices to the respondents. While setting a date for the next hearing as August 10, the court directed that no coercive shall be taken against Sharma.