Omar Abdullah: ‘Centre breaking up PDP; we could join hands with them’ 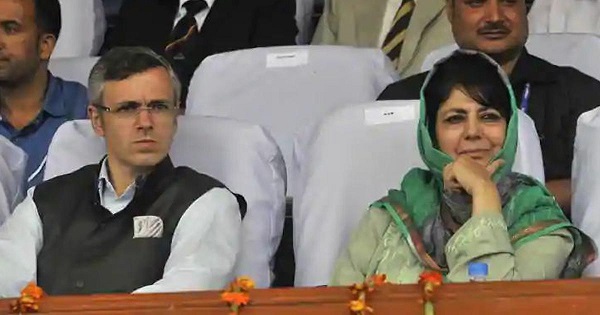 Omar Abdullah, former Jammu & Kashmir (J&K) chief minister, has claimed that the Narendra Modi government is currently focussed on breaking up the People’s Democratic Party (PDP) and because of which its chief Mehbooba Mufti continues to be in detention, according to a recently released book.

Mehbooba has been detained under the National Security Act (NSA), 1980, following the scrapping of Article 370, which granted special powers to J&K, on August 5, 2019.

In an interview with US-based authors, Pradeep Chibber and Harsh Shah, for their book, India Tomorrow: Conversations with the Next generation of Political Leaders, Abdullah also did not rule out “some amount of cooperation” with once arch-rival Mehboob’s party PDP in the larger interests of Kashmir.

“At the moment, it appears as if the entire effort of New Delhi is focused on breaking up the PDP. Because of this, a new political formation call the Apni Party is largely made up of people from the PDP. This may explain why Mehbooba Mufti has been kept in detention longer than I have because they (the Modi government) haven’t met with the same success in breaking away people from the National Conference (NC) as they have with the PDP,” he told the authors.

Abdullah (50) was released from detention on March 24 after seven months.

“We’ll wait and see how that plays out. But obviously some amount of cooperation, some amount of working together with the PDP in the larger interest of general Kashmir cannot be ruled out,” the former Union minister added.

After the Bharatiya Janata Party (BJP) withdrew support to the PDP in June 2018, the then Governor Satya Pal Malik had placed J&K under Governor’s rule and kept the assembly in suspended animation.

However, in November, the NC and the Congress had offered their support to keep Mehbooba in power, but Malik ordered to dissolve the state assembly after the People’s Conference (PC) led by Sajjad Lone staked a counterclaim, saying it had the support of 25 BJP legislators and “more than 18” others.

In her letter to the Governor, Mehbooba had claimed the support of 56 legislators in the 87-member assembly. The PDP had 28 members in the assembly, the NC (15), and the Congress (12). The bloc also had the support of an independent lawmaker.

However, Malik later claimed that he had not received the communication via facsimile from Mehbooba, as it was a holiday.

Asked if he was disappointed with the responses of his party’s old allies such as the Congress to the abrogation of Article 370, Abdullah said that there should have been at least a token resistance because the state’s special status was the legacy of Pandit Jawaharlal Nehru.

“I understand that you don’t want to oppose the revocation, but at least own it. But more than the revocation of 370, I think the thing that disappointed me more was the silence at J&K being humiliated the way it was converted into a union territory (UT). In all the years since independence, this was the first time a state has been downgraded. Otherwise, UTs have always been upgraded to states,” he said.

Abdullah expressed disappointment with Delhi CM Arvind Kejriwal and the Telugu Desam Party (TDP) for not opposing the move to convert J&K into a UT.

“My father left his own election to campaign for N. Chandrababu Naidu, and he was one of the first people to jump straight off with the BJP and say, we support you on everything. These are betrayals that I will not forget easily,” he said.

The former CM said the general population in Kashmir is angry about what happened on August 5 but didn’t react the way they did in 2008, 2010, and 2016 because there was a far larger presence of security forces this time.

“Militancy is something you can control. What you can’t do is force the people to feel more Indian than they feel. You can’t force a sense of isolation, bitterness, anger, or a sense of separatism, out of people. And I dare say that in spite of the BJP and their voices in the media patting themselves on the back that the events of August 5 will end separatist sentiment in J&K, I think it will have no such impact. If anything, those who are sitting on the fence are probably feeling more isolated and more separatist than they were before August 5, 2019,” he said.

Abdullah also claimed that after 2014 there has been no engagement with the people of J&K.

The NC leader reiterated that he is unlikely to participate in any electoral politics in J&K till it is a UT.

“My party won’t boycott elections. I’m talking purely about myself. I don’t see myself as a member of the assembly of the UT of J&K. I’ve been CM of one of the most empowered assemblies of this country. I’m not going to be CM of a UT, where, perhaps, I can’t even decide which peon I want to work in my office. That’s not for me,” he said.

Asked about personal regrets in his political career, Abdullah said there were two major incidents, which he wished had been handled differently when he was the J&K CM. He recounted the allegation of rape and murder of two women in Shopian in 2009 and the 2010 summer of discontentment in which over a hundred people had died.

“That continues to haunt me and always will. Besides, my failure was in not being able to convince the Indian government that hanging Afzal Guru is not going to win them any votes in the general election and, in fact, would push J&K back to the fringes. I wasn’t able to convince them, and that is something I will always regret,” he said.