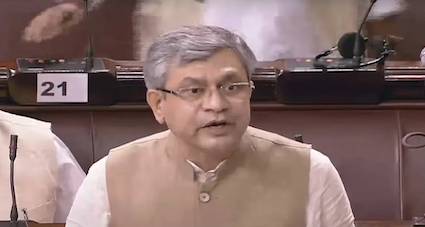 TMC, Congress and other opposition party members, who had earlier forced two adjournments of the proceedings in the Rajya Sabha, rushed into the well of the House as Vaishnaw was called to make a statement on the issue. This stopped the minister in his steps from making the statement and he said he was laying a copy of it on the table of the House.

Following the incident, The Rajya Sabha was later adjourned till tomorrow, the third time through the day. It was first adjourned till 12 noon and then till 2 pm after MPs trooped into the well of the House raising slogans and holding placards.

Deputy Chairman Harivansh asked the members to desist from unparliamentary behaviour, before adjourning the proceedings of the House for the day.

Condemning the incident and calling it a violation of all norms, Bharatiya Janata party Rajya Sabha MP Swapan Dasgupta was quoted as saying, “It seems that some people of Opposition, notably some of the TMC MPs, got up and took the paper from the hands of the minister (IT Minister Ashwini Vaishnaw while he was speaking on ‘Pegasus’) and tore it up. This is completely unseemly behaviour… He was making a statement, you had a right to question him after that, but instead of going in for a debate, is this the type of hooliganism we see inside the House?”

It may be noted that the question hour in Lok Sabha also barely lasted 12 minutes before speaker Om Birla adjourned the House till 12 noon. Congress leader Digvijaya Singh tried to raise the issues of income-tax raids on newspaper group Dainik Bhaskar, but was disallowed by the chair

Meanwhile, the Monsoon Session of the parliament that began this Monday failed to do any business due to the continuous nuisance by the Opposition members.